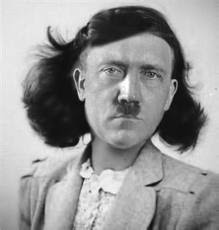 This is funny, given our recent conversation about bioethicist Julian Savulescu’s support for “morally enhancing” people through drugs or implants. Apparently the UK Government plotted to do the same thing to Hitler by feminizing him with estrogen. From the Telegraph story:

Now it has come to light that British spies looked at an even more audacious way of derailing the man behind the German war machine — by giving him female sex hormones. Agents planned to smuggle doses of oestrogen into his food to make him less aggressive and more like his docile younger sister Paula, who worked as a secretary. Spies working for the British were close enough to Hitler to have access to his food, said Professor Brian Ford, who discovered the plot. He explained that oestrogen was chosen because it was tasteless and would have a slow and subtle effect, meaning it would pass Hitler’s food testers unnoticed.

What did they think would happen, Hitler would curtsy and say, “Never mind?” But desperate times call for desperate measures. (Still, if they were that close, why not try to kill him instead?)

Unlike during the War Years, we don’t (yet) live in such desperate times. I see no excuse or justification for trying to “morally enhance” people — not one person, as in Hitler — with brain manipulations. Thus ME isn’t about therapy, but if widely practiced, mind control. Besides, if morals can be enhanced, they can also be degraded. Best to leave this area well enough alone.