#BigFertility: It’s All About the Money

Surrogacy: A 21st Century Human Rights Challenge
The growing surrogacy phenomenon in which women agree to have their bodies used to undergo a pregnancy and give birth to the resulting baby is becoming a major issue of the 21st century. Surrogacy is often referred to as “womb renting” wherein a bodily service is provided for a fee. The practice is fraught with complexity and controversy surrounding the implications for women’s health and human rights generally. Society is only beginning to grapple with the issues that it raises. Increasingly, surrogates function as gestational carriers, carrying a pregnancy to delivery after having been implanted with an embryo. Since the surrogate usually has no biological relationship to the child, she has no legal claim and the surrogate’s name does not appear on the birth certificate. In the United States there is no national regulation of surrogacy and its fifty states constitute a patchwork quilt of policies and laws, ranging from outright bans to no regulation.

A few of the many issues raised by surrogacy include: the rights of the children produced; the ethical and practical ramifications of the further commodification of women’s bodies; the exploitation of poor and low income women desperate for money; the moral and ethical consequences of transforming a normal biological function of a woman’s body into a commercial transaction.

The lack of national laws or regulation of surrogacy in the United States is cast against a backdrop of rising usage. The American Society for Reproductive Medicine reported a 30% increase in surrogate births between 2004 and 2006, for a total of 1,059 live births in 2006, the most recent year for which it could provide data. Industry experts estimate that the actual number is much higher since many surrogate births go unreported.

A fertility-industrial complex has been created to cater to the 8 million infertile women in the United States alone, who are spending approximately $3 billion a year to try to help themselves conceive. Even though the cost to the intended parent(s), including medical and legal bills, runs from $40,000 to $120,000, the demand for qualified surrogates is well ahead of supply. The surrogate herself typically is paid $20,000 to $25,000 in the U.S., which averages approximately $3.00 per hour for each hour she is pregnant, based on a pregnancy of 266 days or 6,384 hours.

In surrogacy, the rights of the child are almost never considered. Transferring the duties of parenthood from the birthing mother to a contracting couple denies the child any claim to its “gestational carrier” and to its biological parents if the egg and/or sperm is/are not that of the contracting parents. In addition, the child has no right to information about any siblings he or she may have in the latter instance.

Surrogacy is another form of the commodification of women’s bodies. Surrogate services are advertised, surrogates are recruited, and operating agencies make large profits. The commercialism of surrogacy raises fears of a black market and baby selling, of breeding farms, turning impoverished women into baby producers and the possibility of selective breeding at a price. Surrogacy degrades a pregnancy to a service and a baby to a product.

The Center for Bioethics and Culture (CBC) has been in the forefront of the movement demanding morally responsible science for over a decade. We call for a cessation of this practice that exploits women’s bodies and endangers their health, disregards the human rights of the children produced, and commodifies human life, turning the miracle of birth into just another commercial transaction and business opportunity for endless profit generation.

Here is a one-page fact sheet on the drugs that are commonly used for women in gestational surrogacy pregnancies. It includes a list and brief discussion of the drugs commonly used to prepare the surrogate for embryo transfer.

Think Again: A Study Guide on the Legal, Medical, and Ethical Questions of Third Party Reproduction is intended for a wide audience as we aim to meet the needs of high school groups, university students, law groups, church groups, and any other group interested in the issues of third party reproduction. Most importantly, the study guide is available for FREE in order to maximize distribution and use. You can download it here. 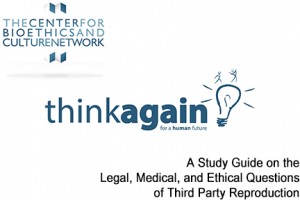