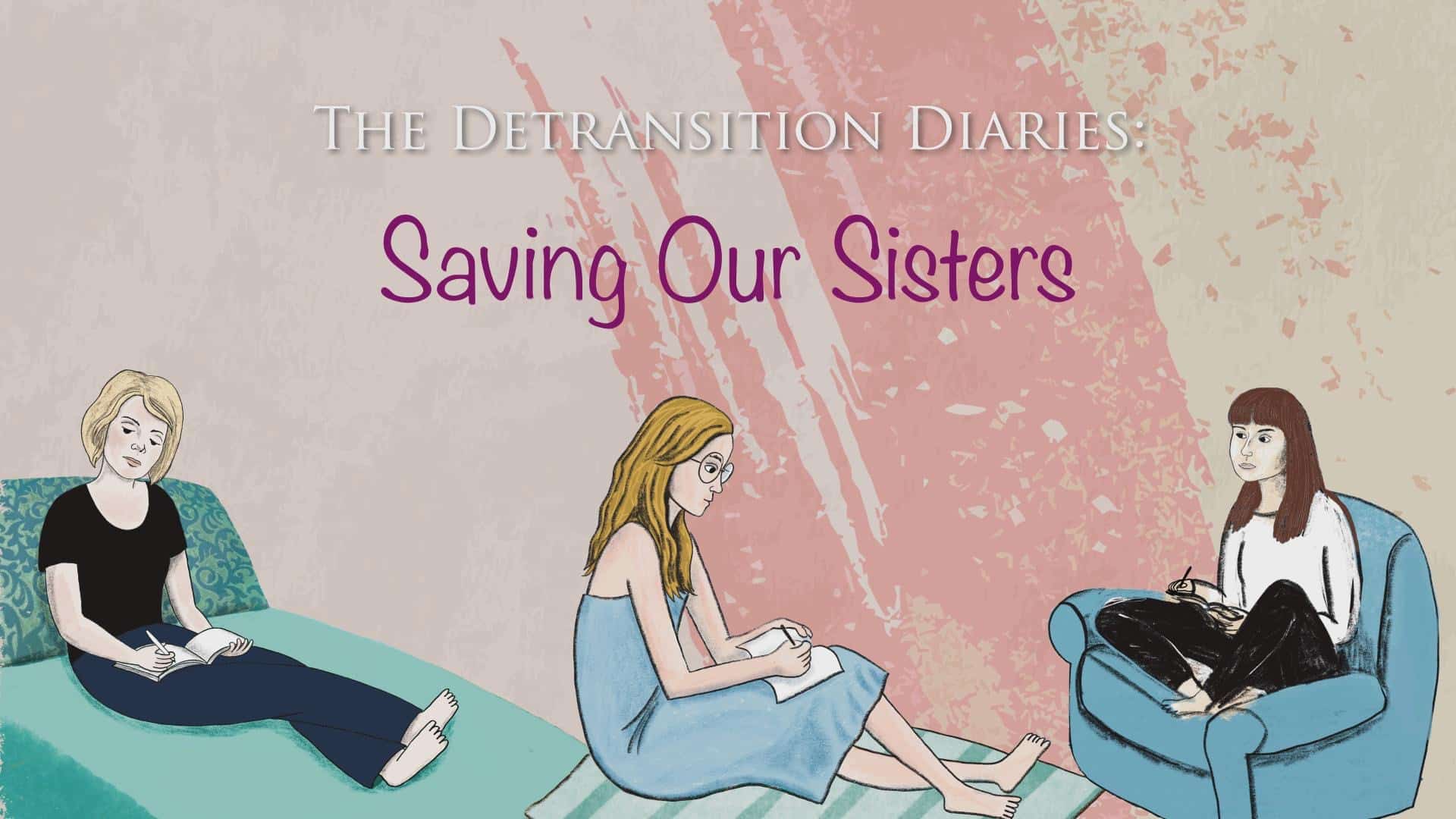 The Detransition Diaries is a documentary film that recounts the stories of three young women, who felt that their trauma and dysphoria would be fixed by trying to medically transition from female to male. Medical professionals, therapists, counselors, and even school officials affirmed that they were indeed ‘trans,’ but only once they started down this path, which promised to offer hope, they each came to realize that they had made a terrible decision. In The Detransition Diaries, you will meet Helena, Cat, and Grace, who all came from different backgrounds but shared similar struggles. Not wanting to live in this world as female, all began medical transition by taking testosterone and one went as far as having a double mastectomy. Each changed their names, their hair, their pronouns, thinking that this would help them and relieve them from their duress and suicidal ideations. Nothing could have been further from the truth. This film focuses on the rising number of young girls and women who decide to transition. Statistics show that between 2016 and 2017 the rate of gender surgeries among women and girls quadrupled in the U.S., and continues to rise. This is due, in part, to the reality of this new social contagion. You will hear from Kellie-Jay Keen, a British Women’s Rights Campaigner, Libby Emmons, Sr. Editor of The Post Millennial who has written extensively on the transgender debate, as well as author and consultant, Natasha Chart, who as a young girl with autism now works to protect autistic children from being affirmed that they are perhaps “born in the wrong body”. Release Fall 2022 Run Time approx. 40 min.

Viewers can share the Trailer, or watch the documentary on Vimeo.

WHAT ARE PEOPLE SAYING ABOUT THE DETRANSITION DIARIES: SAVING OUR SISTERS

“To listen to The Detransition Diaries is to listen to some of the bravest young women living today. Shocking, heart-breaking but inspiring; this film is an absolute must see.”
-Sinead Watson, detransitioned woman and advisor to Genspect

“Detransition stories are remarkable not only because they detail the negative effects of cross-sex hormones and obsession with gender, but because of the deep transformations young men and women experience in their struggle for self-acceptance. The Detransition Diaries allows both sides of this story to be told: one of warning, and another of hope.”
–Benjamin Boyce, host of Calmversations at the Boyce of Reason

“The Detransition Diaries is an absolute must-watch film. Powerful, tragic, and yet hopeful, it allows three young women to share in their own voices their personal experiences with so-called “transitioning”–what made them think they’d be happier living as if they were men, and how they reclaimed their identities and lives as women. No one can afford to ignore stories like these. No one will come away from this film the same.”
– Ryan T. Anderson, PhD, President of the Ethics and Public Policy Center, and author of When Harry Became Sally: Responding to the Transgender Moment

“If you are a person of compassion, if you care about girls and young women, especially those who are hurting or struggling, I beg you to watch The Detransition Diaries. You will hear young women who have been victimized by gender ideology telling their stories in their own words. Please listen to them. Be aware, however, that if you do, you will never be able to say, ‘I didn’t know.’ But be equally aware that if you don’t, you are condemning yourself to be among those who will someday have to say, ‘I chose not to know.”“
-Robert P. George, McCormick Professor of Jurisprudence, Princeton University

“Detransition Diaries” is touching, powerful and brave. Lahl has given young women whose lives were upended by the quack medicine pushed by gender ideologues a chance to tell their stories, and in doing so to try to save other young people from being harmed in the same way.
–Helen Joyce, author Trans: When Ideology Meets Reality

“Three brave young women tell their stories of how typical young female anxiety made them prime targets for a cult of gender which sought to harm them.  Jennifer Lahl’s compassionate storytelling reveals the total lack of safeguarding involved in trans healthcare.”
–Chris Elston aka Billboard Chris

“The Detransition Diaries exposes the cruel lie that girls need to ‘become boys’ to find self acceptance. In the voices — permanently altered by testosterone — of these young women who have painfully earned wisdom beyond their years, this film shares the raw physical, emotional, psychological damage of hiding the discomfort of growing up female behind a false promise that drugs and surgeries uncover one’s “true self.”  If ‘The Detransition Diaries’ was required viewing in every school, for every pediatrician and therapist, and by every lawmaker in America, the ‘trans trend’ would slow to a trickle, and countless teen girls and young women would be saved the confusion and pain of looking to ‘gender transition’ as an escape hatch from being female. Our girls deserve to grow up confident, whole, and healthy, and ‘The Detransition Diaries’ will  embolden young people and parents enmeshed in social or medical ‘gender transition’ to emerge from the grip of the cultish soul-body dualism of gender identity ideology.”
–Candice Jackson, Fmr. Deputy General Counsel, U.S. Department of Education

“The Detransition Diaries chronicles the experiences of three young women who came to believe changing their gender would solve their problems. The film offers a compassionate, illuminating look at a story which is becoming ever-more common yet is still not well-understood: detransition. On the surface, it’s is about the process of attempting to change gender and then coming to accept one’s birth sex, but more importantly, The Detransition Diaries explores a thwarted coming-of-age process and the damage that happens when an entire society fails to safely usher distressed girls into womanhood. We glimpse the inner lives and experiences of Grace, Helena, and Cat, who at their most vulnerable moments, were seduced by a belief about gender and personal transformation, while being ushered into permanent medical changes by physicians and therapists equally entranced by that belief. This film helps us all appreciate how easily we can slip into false hope nd yet it also assures other despairing young women that redemption and rebuilding are possible, even after great personal tragedy..”
–Sasha Ayad, M.Ed., LPC

“Jennifer Lahl is a filmmaker who has been providing documentaries that amplify women’s perspectives and experiences for years. Her latest film is no exception. “The Detransition Diaries” explores the narratives of young women who struggled with growing up in a society that intensely scrutinizes and sexualizes the female form. She presents their stories with compassion and dignity. This is vital viewing for anyone who seeks to understand the identity crisis taking place among young women, and its connection to online cultures, social contagion, and female objectification.”
–Genevive Gluck cofounder of Reduxx Magazine

Jennifer sits down with Allie Beth Stuckey to discuss “The Detransition Diaries” and some of the scary factors that play into the social contagion that’s driving many young girls to transition.

“Detransition stories are remarkable not only because they detail the negative effects of cross-sex hormones and obsession with gender, but because of the deep transformations young men and women experience in their struggle for self-acceptance. The Detransition Diaries allows both sides of this story to be told: one of warning, and another of hope.”
–Benjamin Boyce, host of Calmversations at the Boyce of Reason