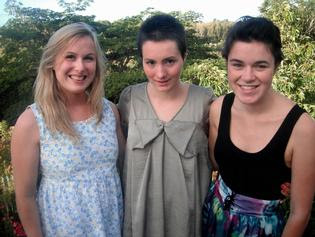 This would have been a bigger story in the USA where patients still have the right to fight these things. In New Zealand, doctors forced a badly injured teenager — Kimberly McNeill, center in the photo at left — off of life support. But contrary to their certainty, she didn’t die. From the story:

A teenage girl whose life support was switched off by a New Zealand hospital against her family’s wishes defied the odds to recover and returned home this week — walking and talking. Doctors forecasted that Kimberly McNeill, 18, would never recover from her severe injuries and 15 days after being transferred to Auckland City Hospital, authorities turned off the life support machine, the New Zealand Herald reported Sunday. Defying the odds, she pulled through and this week, two months after the wreck, which nearly claimed her life, returned to her parents’ home in Napier, on New Zealand’s North Island, to continue her rehabilitation, Hawkes Bay Today reported.

Note the short time given for the girl to recover! It reminds me of the Haleigh Poutre case in Massachusetts. She’d be dead now if doctors had had their way in a timely fashion. She was only saved because the death bureaucratic necessities gave her time to wake up.

This is a warning. Doctors don’t know everything. Hospitals are not always right. Futile care theory not only violates patient autonomy, but it could abandon some — not many, but some — to death when they might otherwise have lived. And don’t say, “Well, these girl lived, so what’s the harm?” The harm is that was no thanks to the futilitarians. Indeed, Kimberly’s life was surely put at greater jeopardy by the futile care imposition, not the other way around.

Nitschke Doubles Down on Death-on-Demand

You Can’t Make This Stuff Up