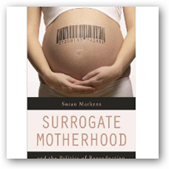 I thought that language which dehumanized women was supposed to be verboten. But in the procreation as manufacture world of IVF, surrogate mothers, who used to be known as birth mothers, are now called “gestational carriers.” As in the recent birth of a child for Nicole Kidman and her husband by a surrogate birth mother. From the story:

The couple announced on Monday the arrival of Faith Margaret Kidman Urban, born on Dec 28 at a Nashville, Tennessee, hospital. Kidman and Urban released a statement saying they are “truly blessed” and thanked everyone for their support, “our gestational carrier” in particular.

I am reminded of Dune’s “axlotl tanks,” which are women who are lobotomized and then their bodies used as gestational carriers for clones. Now, surrogates mothers aren’t lobotomized, of course. But they are being objectified.