Compassion and Choices In No Place to Judge Online Suicide Assistance 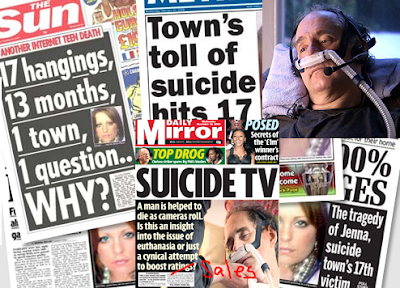 There is an awful story about a suicide obsessed man named William F. Melchert-Dinkel, who allegedly helped counsel and teach the suicidal–including a Canadian college girl–to do the deed over the Internet. He has been criminally charged with assisting suicide in two cases. From the story:

Mr. Melchert-Dinkel, whose lawyer declined an interview request on his behalf, told investigators that his interest in “death and suicide could be considered an obsession,” court documents say, and that he sought the “thrill of the chase.” While the charges stem from two deaths — one in Britain in 2005 and one in Canada in 2008 — Mr. Melchert-Dinkel, who was indeed a licensed practical nurse, told investigators that he had most likely encouraged dozens of people to kill themselves, court documents said. He said he could not be sure how many had succeeded.

Naturally, the Times called Barbara Coombs Lee who tried to differentiate these two assisted suicides from the hundreds for which she and her organization bear moral responsibility:

Barbara Coombs Lee, the president of Compassion and Choices, who has advocated for laws like the one in Oregon, said she found it “perfectly appropriate” that Mr. Melchert-Dinkel faces such charges. “This is so egregious, so clearly wrong, that I’ll be very disappointed if assisted-suicide statutes do not reach this,” she said. “There is a bright line between aid in dying and assisting in suicide like this.”

Melchert-Dinkel did a horrible thing by condoning and helping teach people he did not know how to commit suicide. But Barbara Coombs Lee is the last person who should be looking down her nose.

Sex for Fun and IVF for Babies

Donald Herbert has something to say