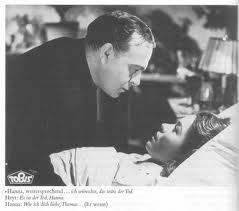 Oh joy. Yet another movie that features the “love” that supposedly is euthanasia. From the Daily Beast story:

The plot couldn’t be simpler. Georges (Trintignant) and Anne (Emmanuelle Riva) are retired classical-music teachers who still relish each other’s company and the daily pleasures of meals and attending concerts. When Anne falls victim to a stroke, their world is turned upside down. Their middle-aged daughter, Eva (Isabelle Huppert), returns from London to Paris with her English husband but is appalled by her once vibrant and lucid mother’s sad transformation. At one point she remarks to her father, “She’s speaking gibberish … what’s next?” He replies that her condition “will go steadily downhill until it’s worse.” While there’s no facile sentimentalism in Haneke’s portrait of old age, the critics in attendance at Cannes, many of whom could not stomach his earlier films, are apparently responding to the purity of the love shared by a couple who appear totally devoted to each other.

Although Haneke does not make conventional “message movies,” Amour‘s seeming endorsement of euthanasia certainly will prove controversial in some circles when Sony Classics releases the film in the United States. That’s fine with Haneke, who commented: “My American distributor thought that the film might provoke hefty debate; that’s exactly what films are supposed to do.” Trintignant adds: “I’m personally for euthanasia. When Anne first really wants to die, Georges stops her. But later, in a calm moment, he helps her by killing her.”

Of course he does. But this is hardly new among the arteests. I guess these people haven’t seen Million Dollar Baby, the Kevorkian hagiography You Don’t Know Jack, and a plethora of other films and television shows that positively depict euthanasia. Then, there was the notorious old 1941 German euthanasia propaganda film, Ich Klage an (I Accuse) — that had a doctor kill his pianist wife at her request because she had MS and couldn’t play piano anymore — a POV that is now mainstream in Hollywood. Indeed, it is very close to Million Dollar Baby’s denouement, in which the Clint Eastwood character kills his female boxer protege because she has become quadriplegic.

But here’s a story that deserves to be made into a movie. It is a true story. It has drama. Conflict. Heart rending scenes of suffering and an assisted suicide. There was even a book by the suicide assister, But What If She Wants to Die?

Here’s the plot: George Delury — I think he should be played by Robert DeNiro, no, we need to go more sensitive, Alan Alda — is married to Myrna Lebov. I think we should call Maryl Streep’s agent, or if we want her to be more vulnerable, Diane Keaton. Myrna has progressive MS, and of course, wants to die rather than live with a serious disability. George is reluctant, but he finally agrees. After the death, he turns himself in and the assisted suicide movement adopts him as one of their own — which, of course, he is.

But here’s the plot twist: George planned to write a book about the assisted suicide, so he kept a diary on his computer that was discovered by the police. I like Jeff Daniels, so let’s cast him as the detective. It turns out that Myrna’s suicide wasn’t her idea, it was George’s! Imagine what the sensitive Alda could do with that moment, transforming in front of our very eyes from a loving, compassionate, and sensitive husband into a crass and selfish abandoner!

Worse, the diary reveals that George pushed Myrna into the suicide, repeatedly berating her for burdening him, telling her, “I have work to do, people to see, places to travel. But no one asks about my needs. I have fallen prey to the tyranny of a victim. You are sucking my life out of me like a vampire and nobody cares. In fact, it would appear that I am about to be cast in the role of villain because I no longer believe in you.” Oscar time, baby!

It would make a great movie. But Hollywood won’t touch it. True story. Wrong message.

This Week in Bioethics #98