Should We Kill Alzheimer’s Patients? 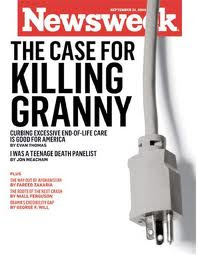 A very disturbing article in New York Magazine by Michael Wolff. It tells the difficult story of his mother’s dementia, a course of physical and mental decline about which I am very familiar as my uncle died from the complications of that Alzheimer’s disease. But Wolff says that such patients have lost dignity, and indeed, he more than implies the proper approach to dealing with dementia is to kill them sooner rather than bear the emotional and financial expense of caring for them over the long term. From, “A Life Worth Ending:”

It is peaceful and serene. Except for my mother’s disquiet. She stares in mute reprimand. Her bewilderment and resignation somehow don’t mitigate her anger. She often tries to talk — desperate guttural pleas. She strains for cognition and, shockingly, sometimes bursts forward, reaching it — “Nice suit,” she said to me, out of the blue, a few months ago — before falling back. That is the thing that you begin to terrifyingly appreciate: Dementia is not absence; it is not a nonstate; it actually could be a condition of more rather than less feeling, one that, with its lack of clarity and logic, must be a kind of constant nightmare. “Old age,” says one of Philip Roth’s protagonists, “isn’t a battle, it’s a massacre.” I’d add, it’s a holocaust. Circumstances have conspired to rob the human person — a mass of humanity — of all hope and dignity and comfort. When my mother’s diaper is changed she makes noises of harrowing despair — for a time, before she lost all language, you could if you concentrated make out what she was saying, repeated over and over and over again: “It’s a violation. It’s a violation. It’s a violation.”

Often, the people who really suffer in dementia cases are the loved ones. I know we did. It is very hard to see your formerly vibrant and interactive mother, father, uncle, spouse, so ill and vulnerable. But they are not without dignity — unless we so define them. Their hygiene needs do notreduce them to something less human. The family chose to accept some high end interventions — which no one forced on them. But those are tough calls too, so no judgment there. And here’s the call to killing:

I do not know how death panels ever got such a bad name. Perhaps they should have been called deliverance panels. What I would not do for a fair-minded body to whom I might plead for my mother’s end. The alternative is nuts: to look forward to paying trillions and to bankrupting the nation as well as our souls as we endure the suffering of our parents and our inability to help them get where they’re going. The single greatest pressure on health care is the disproportionate resources devoted to the elderly, to not just the old, but to the old old, and yet no one says what all old children of old parents know: This is not just wrongheaded but steals the life from everyone involved. And it seems all the more savage because there is such a simple fix: Give us the right to make provisions for when we want to go. Give families the ability to make a fair case of enough being enough, of the end’s, de facto, having come . . . My bet is that, even in America, even as screwed up as our health care is, we baby-boomers watching our parents’ long and agonizing deaths won’t do this to ourselves. We will surely, we must surely, find a better, cheaper, quicker, kinder way out.

Yes indeed, for Baby Boomers, it is always about us.

My uncle was helpless at the end, his condition made more difficult by serious glaucoma, added to the travails of dementia. But he was not undignified. Indeed, I would posit he had a greater claim on our love, commitment, and care than when he was a vigorous activist in the Teamster’s Union. And the people who cared for him at a wonderful Baptist continuing care home could not have been more committed to their patients’ well being, cleanliness, and comfort.

We already have the right to refuse unwanted medical treatment. Before becoming incompetent, my uncle made it clear that he did not want heroic measures or antibiotics at the end, and as his surrogate, I made sure he did not receive them. But his was not a life worth ending, it was a life worth caring. And that is precisely what my uncle received, individualized and loving attention until his time had come.

But there is an agenda afoot to get us to die sooner rather than later. So the caring story does not seem to be one that big time media is much interested in telling.