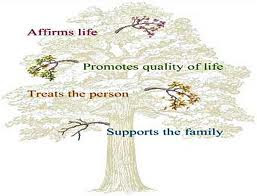 We often hear from doctor-prescribed death advocates that assisted suicide legalization improves palliative care. It’s not true. Increased attention to the issue, e.g. hospice and public and professional education programs do. Indeed, about a decade ago, Rhode Island outlawed assisted suicide and also passed a law that aggressive palliation that accidentally resulted in death would not be considered a crime. The use of morphine by doctors for pain patients shot through the roof.

A new article by palliative care published in the Journal of Palliative Medicine, grades states on their hospital palliative care programs. Here is how the assessment criteria were defined. From “America’s Care of Serious Illness: A State-by-State Report Card on Access to Palliative Care in Our Nation’s Hospitals:”

Montana, where the legal status of assisted suicide is murky due to a terribly written and reasoned Montana Supreme Court decision, has 67% coverage.

The good news from the report is that palliative care is improving:

Clearly, there is more work to do, but things are heading in the right direction. Reality check: Legalizing assisted suicide has nothing to do with it.

Pushing Starvation as “Death with Dignity”