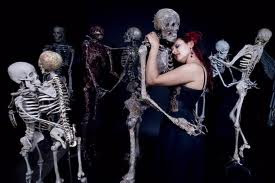 The Netherlands is a lovely country where many people have eschewed true compassion — the root meaning of which is to “suffer with” — to promote suicide as the answer to human difficulty. Euthanasia is available via lethal injection for the terminally ill, the chronically ill, people with serious disabilities, and the despairing who are not physically sick. Infanticide is illegal, but allowed. Non voluntary mercy killing by doctors is a routine event, with several a day according to studies. The Dutch Supreme Court approved assisted suicide for a woman who wanted to be buried between her two dead children.

One would think that would at last be enough “compassionate” killing, thank you very much. Nope. Once a culture embraces this brand of nihilism, the appetite for suicide-as-the-answer is never satiated. Now, some Dutch suicide activists — can you imagine? — are setting up a clinic for those whose doctors won’t make them dead. From Bioedge:

The Dutch voluntary euthanasia society (NVVE) is planning to open an eight-person clinic in 2012 where people can go to end their lives. It estimates that about 1,000 people a year would take advantage of its facilities. It would cater for people whose doctors have refused to euthanase them. Not only people with an incurable illness, but also people with chronic psychiatric conditions and dementia would be welcome.

Some Dutch doctors are already in the business, compassionately giving their suicidal patients a how to do it yourself guide if they won’t do the deed themselves. They even gave it a name: Autoeuthanasia.

The Dutch like to think of themselves as enlightened leaders of society into modern ways. I worry they are right. Culture of death, Wesley? What culture of death?

What’s Wrong with IVF? Let Me Count The Ways!