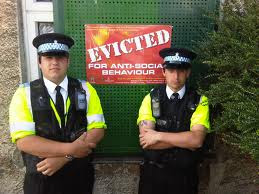 Things have gone from the ridiculous to the surreal in the UK ever since the Law Lords ordered England’s public prosecutor to tell folk when assisted suicide would and would not be prosecuted. That helped foster the belief among some that suicide is a necessity, and certainly promoted suicide as an acceptable answer to the problems of serious illness or disability.

And now, media is reporting that nursing homes for supposedly threatening to evict residents out of fear they will kill themselves on premises. From the story:

A Sky News investigation has discovered elderly nursing home residents who want to end their own lives have been threatened with eviction over concerns about the law on assisted suicide. In one case, a severely disabled pensioner was told he would have to leave his nursing home on Tyneside despite needing 24-hour care. In another case, a family that wants to remain anonymous is fighting to keep an elderly relative in a nursing home after she was threatened with eviction for collecting pills to use as an overdose.

Suicidal people in nursing homes should not be evicted. Yes, they should prevented from killing themselves on premises — just as we would anyone — not only for their sake, but for the sake of the other residents. But they should also be helped — not to die as one commenter in the story strongly implies, but to live.

Whatever happened to suicide prevention?