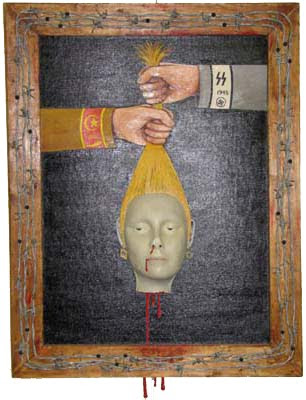 The revisionist project to create a fictional Jack Kevorkian as merely a lovable, if sometimes tactless, man of compassion–rather the misanthropic and ghoulish nut that he really is–continues. (See Kevorkian paintings I uploaded to accompany this post. He sometimes used human blood in the paint.) You Don’t Know Jack, the biopic on HBO starring Al Pacino, pushes that meme, just as I predicted, and Newsweek approves. From the movie review:

Relax about Pacino’s tendency to chew the scenery. He’s terrifically restrained—even his flat Midwestern accent. His complicated Kevorkian comes close to being a lovable old coot in a cardigan and fishing hat, but he’s also rude and anti-social. He may be a weird guy, but he’s a zealot, not a murderer. Until this film, we have not glimpsed a human beneath the ghoulish Dr. Death figure. That fleshed-out image matters because Kevorkian remains a touchstone in the euthanasia debate. In a Vanity Fair/CBS poll last month, 40 percent of those asked said he was “not as bad as he’s made out to be,” and 34 percent chose “egomaniac who takes advantage of sick people.” Like the movie’s title, the poll put a cheeky gloss on a serious question. Making the grim message palatable may be the new, fashionable twist in burnishing Kevorkian’s image.

To depict Kevorkian as merely idiosyncratic, you have to willfully refuse to report the full story in all of its macabre vividness. And that is something the media has done now for nearly two decades. But let us be clear: They don’t know Jack because they don’t want to know Jack. But I do. As I stated in a previous post, this is the truth about Jack Kevorkian:

1. Before assisting the suicides of disabled, terminally ill, and the non sick despairing, Kevorkian went to most prisons where executions are conducted asking to experiment on condemned prisoners.
2. He never limited his killing practice to people with terminal illnesses. About 70% were disabled. Five of Kevorkian’s patients were not sick upon autopsy. 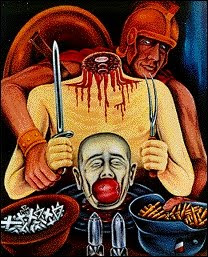 3. Kevorkian took the kidneys from one assisted suicide victim–a man with quadriplegia–and held a press conference offering them “first come, first served.”
4. Janet Good (played by Susan Sarandon), conspired with Kevorkian in his reign of lawlessness, even planning to help kill a patient and then, with Kevorkian, rush the cadaver into a hospital, so organs could be procured. (They never carried out the plan). She committed assisted suicide and her autopsy showed that her pancreatic cancer was not near the terminal stage.
5. Kevorkian did not care much about alleviating the suffering of patients, (he once said he couldn’t remember their names) but rather called it “a first step, an early distasteful professional obligation” toward obtaining a license to engage in human experimentation, writing further…
6. Kevorkian wanted to experiment on the brains and nervous systems of people he was euthanizing…

It is a disturbing sign of the times that a man who is so clearly disturbed and a social outlaw, could be depicted as a hero. Here’s a link to a more detailed piece I wrote about “Jack the Valiant” for your perusal.

“In the Body” Cell Reprogramming Hope for Treatment of Heart Disease

Adult Stem Cells – the Gift that Just Keeps on Giving