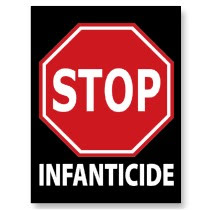 Ah, the Dutch: Having jumped off a vertical moral cliff when it comes to doctors killing patients, they seek to replace virtue with “transparency” through official reporting. The idea is that control over such practices can be maintained if the homicides are done in front of an open window rather than behind a closed curtain. But it doesn’t actually turn out that way. Several studies have shown that active euthanasia is dramatically under reported by death doctors–despite explicit legalization. The same is proving true of the quasi-decriminalized infanticide license–at least according to an article published in the Journal of Medical Ethics. (“Dutch experience of monitoring active ending of life for newborns,” J Med Ethics 2010;36:234-237, no link, here’s the Abstract.)

One potential reason is the apparent increase in eugenic abortion:

The introduction of ultrasound examination in 2006 at 20 weeks’ gestation as part of the routine prenatal screening in The Netherlands is another relevant development in medical practice. Although our data provide no explanations, ultrasound examination is expected to result in higher detection rates of structural congenital abnormalities, as shown in other countries where routine ultrasound examination has been an integral part of prenatal care much Ionger. This increased prenatal detection rate may result in more induced abortions before 24 weeks of pregnancy, fewer infants born with a congenital abnormality, and fewer postnatal deaths as a result of congenital abnormalities.” The fact that the abortion ratio (the number of induced abortions per 1000 newborns) is still increasing in The Netherlands supports this assumption. The impact of such developments is probably that the frequency of end-of-life decisions in infants in The Netherlands has decreased.

Still, aborting infants who would be disabled or dying if they were allowed to be born does not fully account for the dearth of reported infanticides. Rather than the 15-20 cases expected (in contrast, the Lancet has published two studies claiming about 80 infanticides per year), apparently only one was reported for 2007. The authors–who are Dutch bioethicists and/or physicians with different university medical centers–aren’t buying that figure, and so they seek to find out the reasons for the under reporting of the killing. It is a sickening read because it presumes the propriety of infanticide, euphemistically called “active ending of life,” and further assumes that the only real problem with the whole pogrom against what are clearly presumed to be defective infants, is one of bureaucratic i-dotting and t-crossing. From the conclusion:

We identified several changes in the practice of end-of-life decision-making for infants that may explain the lack of reporting of cases of the active ending of life. Furthermore, it seems virtually impossible to comply with the requirements in the current regulation, due to either time constraints or the nature of thesuffering that is addressed. Jf societal control of active ending of life in newborns is considered useful, a different regulation is needed. Attention should be paid to the requirements for careful practice in the current regulation, to physicians’ awareness of when they should report their act, and to a safe legal environment for reporting.

Yes, with euthanasia the impetus is to almost always to loosen regulations, in this case of babies, not to stop killing. But I don’t know why these authors are surprised. Killing is always best done in the dark.

Why that Film Affected Me So

Legislation for the Human Future