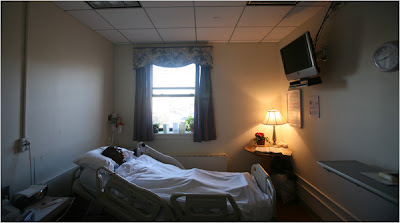 Palliative sedation, that is putting an imminently dying patient into an artificial coma and allowing the disease to take its course, is a legitimate palliative technique–when the symptoms warrant it. Thus, in the rare case where pain can’t be controlled or a patient panics due to severe agitation or inability to catch a breath, a legitimate answer is sedation.

This should give us all the great comfort of knowing we need not die in agony–no matter what our condition. And today, the New York Times has a pretty good in-depth discussion of the issue. It is too long to detail fully in a blog, but there are some points worth highlighting. From the story:

Among those choices is terminal sedation, a treatment that is already widely used, even as it vexes families and a profession whose paramount rule is to do no harm. Doctors who perform it say it is based on carefully thought-out ethical principles in which the goal is never to end someone’s life, but only to make the patient more comfortable. But the possibility that the process might speed death has some experts contending that the practice is, in the words of one much-debated paper, a form of “slow euthanasia,” and that doctors who say otherwise are fooling themselves and their patients.

First, it shouldn’t be called terminal sedation because death isn’t the intent. The words we use matter in this debate. Second, I don’t know of any palliative expert that opposes sedation as a last resort legitimate medical tool. Indeed, if properly applied based on otherwise uncontrollable symptoms, palliative sedation isn’t slow motion euthanasia because the issue isn’t whether life is “shortened.” The issue is whether the physical suffering of the patient could not otherwise be alleviated. If not, and sedation is applied, then if death comes sooner–and as the article points out, there is usually little way to tell–it is a side effect of a legitimate treatment.

In this regard, it is important to remember that any medical treatment can have a lethal side effect. That isn’t the same thing as mercy killing. Consider: Sometimes patients die earlier than they would otherwise have during surgery intended to save life. That is no more euthanasia than dying from legitimately applied pain control.

Criticisms of legitimately applied palliative sedation, as mentioned above, may be based on a vitalistic notion that anything that results in an earlier death is killing. But as noted above, that clearly isn’t true. Perhaps, more often, it is intended to blur the lines between euthanasia and palliation, to make the former easier to justify politically.

Among the intentional line blurrers is the assisted suicide advocacy organization Compassion and Choices–formerly the Hemlock Society–that clearly has ambitions to become the Planned Parenthood of death. C & C was the moving force behind pernicious legislation in California two years ago–AB 2747–that as originally written would have given a legal right to patients with one year or less to live to demand sedation and withdrawal of food and fluids–without regard to whether their symptoms warranted such radical action–so that death would be caused by dehydration. (That part of the bill was defeated.) I wrote at length about AB 2747 here, for those who want more details.

That problem of blurred lines is addressed in the article:

There is one ethical guidepost for all the protocols: Terminal sedation should not become so routine that the end of life is scheduled like elective surgery, for the convenience of the doctor or the family, or because the patient’s care is no longer economically viable. Physicians occasionally feel pressure to turn up the medication, said Dr. Pauline Lesage, Beth Israel’s hospice medical director. The pressure may come from weary relatives, who say, in effect, “Now it’s enough; I just want him to disappear.” Sometimes the pressure is institutional. “You may be tempted to jump over because, oh well, ‘I need the bed,’ or ‘That’s enough, I don’t see what we are doing here,’ ” she explained. The doctors resist pressure to deliberately hasten death, she said. “Otherwise you see that you are jumping into a different field.”

Relevant to Obamacare and its intent to centralize the standards of medical treatment under federal control, we have also seen some apparent abuses of palliative sedation in the UK under the Liverpool Care Pathway–pushed by the country’s rationing board NICE–which seems to have been misapplied to treat dying patients as members of categories rather than individuals, meaning some received sedation whose symptoms did not warrant it. Indeed, as I reported over at NRO, that seems to have led to the death by dehydration of at least one patient whose autopsy showed he had a treatable condition.

I am glad the NYT published the article. And as I said, it is too long to really discuss in detail here. I think certain distinctions could have been clearer. But this is an issue worth knowing about. Indeed, knowledge is the best way to keep it from being abused–both at the clinical setting and in the public square.