Obama Administration Rightly Says Genes Should not be Patentable 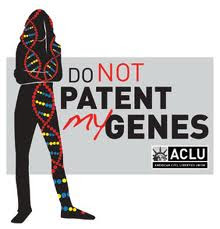 Reversing a longstanding policy, the federal government said on Friday that human and other genes should not be eligible for patents because they are part of nature. The new position could have a huge impact on medicine and on the biotechnology industry. The new position was declared in a friend-of-the-court brief filed by the Department of Justice late Friday in a case involving two human genes linked to breast and ovarian cancer. “We acknowledge that this conclusion is contrary to the longstanding practice of the Patent and Trademark Office, as well as the practice of the National Institutes of Health and other government agencies that have in the past sought and obtained patents for isolated genomic DNA,” the brief said.

It is not clear if the position in the legal brief, which appears to have been the result of discussions among various government agencies, will be put into effect by the Patent Office. If it were, it is likely to draw protests from some biotechnology companies that say such patents are vital to the development of diagnostic tests, drugs and the emerging field of personalized medicine, in which drugs are tailored for individual patients based on their genes.

Well, that’s too bad. For some reason Big Biotech thinks the rules that apply to others shouldn’t apply to it. That sense of entitlement has got to go.

The law should mean what the law says, as a trial judge noted in the ruling being appealed:

In a surprise ruling in March, Judge Robert W. Sweet of the United States District Court in Manhattan ruled the [two gene] patents invalid. He said that genes were important for the information they convey, and in that sense, an isolated gene was not really different from a gene in the body. The government said that that ruling prompted it to re-evaluate its policy.

If the best policy is to let genes be patented — let’s have that discussion and change the law if it is deemed best. But until then, the law is the law and it should apply equally to all.

Advertisin’ on the Railroad, All the Live Long Day