Immortality Would Not Be Pretty 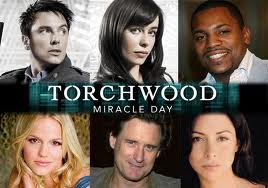 This season’s Torchwood, which was once fun science fiction — a spinoff of Dr. Who — has this season, become great science fiction. Shades of Death Takes a Holiday, the plot line has human death suddenly stopping, beginning with a child sexual predator/killer who survives his execution — played with magnificent smarminess by Bill Pullman, and then spreading to everyone in the world — except Captain Jack who is immortal, but has now been made mortal.

The story line is a quest by the remade Torchwood team to find out who has done the dead, how, and why. Along the way, the show deals with how society copes when people can still be catastrophically injured or ill, but no one can die — and it isn’t pretty. “Category 1″ people are dead, but not because they can’t die. So, it is cremation to dust. A nihilistic social movement starts. The child killer becomes a mega celebrity after “apologizing” on television complete with tears. Boy, does that catch our current emotional-narratives-are-king scene!

The show has also caught the eye of an author named Stephen Cave, who writes an interesting piece in the NYT asserting that the search for immortality actually drives civilization. From “Imagining the Downside of Immortality:”

The problem is that our culture is based on our striving for immortality. It shapes what we do and what we believe; it has inspired us to found religions, write poems and build cities. If we were all immortal, the motor of civilization would sputter and stop.

I am not sure about that. I think that our desire for an afterlife built religion, and religion helped build society. But look at the Romans and the Greeks. With the exception of rare heroes, the afterlife was considered pretty grim for everyone, not at all the Christian concept of paradise. Julius Caesar wanted to be remembered forever — he succeeded — and I suppose that is a form of immortality — and he was certainly driven. But still, I think many other factors drive society beyond the desire to never die. And communism certainly was a driving force — and its materialistic ideological drive was wall about the ere and now, not forever after.

But here, I think, Cave is very right:

The real question posed by the “Torchwood” scenario is: what would happen to all our death-defying systems if there were no more death? The logical answer is that they would be superfluous. We would have no need for progress or art, faith or fame. Suddenly, we would have nothing to do, yet in the greatest of ironies, we would have endless eons in which to do it. Action would lose its purpose and time its value. This is the true awfulness of immortality. Let us be grateful that the elixir continues to elude us — and toast instead our finitude.

Agreed. Here’s looking at you, kid.

No to Coerced Vasectomy

We Already “Put Down” the Disabled!