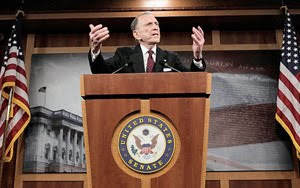 I cannot tell you how weary I am with the mendacity of so many pro embryonic stem cell research supporters, particularly those in government. Senator Arlen — he who will not be missed — Specter is one of the worst, and he is at it again in his swan song as a legislator. In introducing a bill to make ESCR federal funding permanent, he engaged in his usual misleading ways (or the reporter got it way wrong). From the story in The Hill:

Specter said the National Institutes of Health has already made “revolutionary advances” with the help of a $10 billion allocation included in the February 2009 stimulus bill — for which Specter was a key Republican vote . . . The NIH allocation helped researchers make progress fighting cancer, Alzheimer’s disease, Parkinson’s disease, diabetes, osteoporosis and heart disease, among other illnesses, Specter said.

What? Yes, the NIH received $10 billion. But it certainly didn’t all go to ESCR. In fact, very little went to ESCR. There aren’t enough experiments planned to require that kind of funding. Indeed, as the NYT reported earlier, the NIH has given $130 million to human ESCR under Obama.

Arlen Specter is a prevaricator of the first order. His new bill would also permit funding of human cloning researchby misdefining the term to mean implantation of a cloned embryo into a uterus rather than its true definition. From his yet unnumbered bill:

DEFINITIONS: In this section, the term ‘human cloning’ means the implantation of the product of transferring the nuclear material of a human somatic cell into an egg cell from which the nuclear material has been removed or rendered inert into a uterus or the functional equivalent of a uterus.”

The actual act of human cloning is somatic cell nuclear transfer, as (rather poorly) defined in the italicized text above. That process, if it works, creates an embryo — dehumanized as “the product” in the above definition. Once that process is complete, there is no more cloning. From that point, the embryo develops like a naturally created embryo. In other words, implantation is no more cloning than it is the act of fertilization in IVF. Thus, the bill would authorize human cloning research so long as the cloned embryo was not implanted.

What a first class practioner of deceptive politics at its most disgustingly mendacious. When our leaders are this dishonest, people lose faith in government.

NHS Meltdown: As the Service Founders on the Financial Rocks, a Call to Legalize Assisted Suicide

What’s love got to do with it?