Culture of Death: The Assault on Medical Ethics in America Finally Available Again 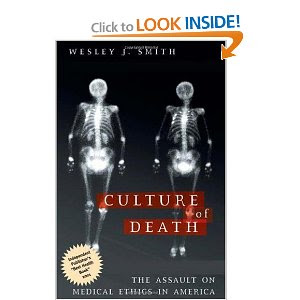 And now a word from our sponsor:

COD, as I call it, has probably been my most successful book, other than The Lawyer Book, back in 1988. It has certainly had the most impact (followed closely by Forced Exit, which is more narrowly focused on euthanasia/assisted suicide).

The good news is that it sold well. The bad news is that the publisher ran out of stock months ago, and people have been unable to obtain it new except at a ridiculous price from private book sellers. That had me quietly pulling my hair out, as the demand for the book remains quietly steady. But it is now available again under a new system of print on demand, so the dreaded term, “out of stock,” should be archaic from this point forward.

I don’t use the term human exceptionalism in the book, but COD launched my effort to defend universal human equality in the medical and bioethical context, now expanded to encompass all areas of threat (as I perceive it). The book was named one of the “10 Best Books” and “Best Health Book of the Year” in 2001 by the Independent Book Publishers, and despite its age, still holds up well. So, if you are interested in a thoroughly sourced critique of utilitarian bioethics and clear and present threat it poses to universal human rights — a constant theme of mine from this book forward — Culture of Death is for you.

Thank you for your attention. Now, back to our regularly scheduled program.

10 year anniversary in Oregon is not so happy

Surrogacy Up Close: “Points of Origin”