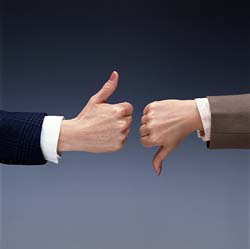 Honestly calling euthanasia, “euthanasia,” reveals that most Americans oppose legalization. From the story:

A new Angus Reid poll find that 42 percent of American adults are in favor of making euthanasia legal in the United States, although 52 percent feel legalizing induced death would leave vulnerable people without sufficient legal protection. The survey steered clear using such deliberately non-threatening terms as “Death With Dignity” favored by supporters of assisted suicide. In the 2008 election, by a 58 percent to 42 percent vote, Washington became the second U.S. state to legalize physician-assisted suicide. In its poll of 1,001 American adults, taken Feb. 4 and 5, Reid asked: “Generally speaking, do you support or oppose legalizing euthanasia in the United States?” The results: 14 percent answered “Strongly Support,” 28 percent “Moderately Support”, 14 percent “Moderately Oppose,” and 23 percent “Strongly Oppose.” A total of 22 percent were not sure.

The results were more evenly split about whether assisted suicide “should be prosecuted,” with a plurality saying yes:

“Do you think people who help a person to commit suicide should be prosecuted?” Reid asked. Thirty-seven percent said “Yes,” 34 percent answered “No,” with 28 percent “Not Sure.” Independent voters were strongest in saying those who assist suicide should not be prosecuted.

This is why euthanasia/assisted suicide advocates use euphemisms to sell the hemlock: They think that with gooey phrases, they can fool enough of the people, enough of the time to get their agenda through.

The 10 Best Chores to Outsource

Designer Babies Take Another Turn for the Worse