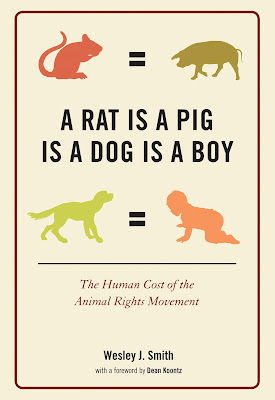 My new book, A Rat is a Pig is a Dog is a Boy: The Human Cost of the Animal Rights Movement is at the printer and will be available in early February (with a good discount at Amazon), a few weeks later than expected, but what else is new in publishing? This is the final cover.

I admit to being pretty jazzed. This is my 12th book and it never gets old. More importantly, I hope A Rat is a Pig, etc. adds substantially to the debate and particularly helps clarify the crucial difference between animal rights and animal welfare, as it focuses us on the importance of human exceptionalism.

Special thanks to the novelist Dean Koontz for his splendid preface. Here’s an excerpt:

Like every antidemocratic ideology, this one [animal rights] is by definition antihuman, and like any antihuman ideology, it ultimately deteriorates into a nihilistic bitterness that is anti-life . . . Wesley J. Smith knows too well that if the activists ever succeeded in their goals, if they established through culture or law that human beings have no intrinsic dignity greater than that of any animal, the world would not be a better place for either humankind or animals.

Here are some other endorsements:

Clearly written and authoritatively referenced, Smith’s book is a real eye-opener. The book exposes animal extremism for what it really is: a threat to both animal and human well-being. Long on fact and logic, A Rat Is a Pig Is a Dog Is a Boy will frustrate those animal rightists who use fallacious logic and erroneous ‘facts’ to buoy their arguments.
—P. Michael Conn, scientist and co-author of The Animal Research War

A rat is a pig is a dog is NOT a boy, is Wesley Smith’s powerful message. He argues fervently that human exceptionalism with due attention to humane treatment of animals is a moral imperative if our society is to survive. And he magnificently defends his view that at its core the term animal rights ‘actually denotes a belief system, an ideology, even a quasi religion, which both implicitly and explicitly seeks to create a moral equivalence between the value of human lives and those of animals.’ The book is a chilling, authoritative account of the danger that animal rights extremism poses to medical progress and is one that I highly recommend to a general audience.
—Adrian R. Morrison, author of An Odyssey With Animals: A Veterinarian’s Reflections on the Animal Rights & Welfare Debate

Thank you Drs. Conn and Morrison for your kind words–and your efforts on behalf of human wellbeing.

No reviews yet. I expect some to conflate animal rights with being nicer to animals, meaning that I am for animal abuse. Of course, neither is true. And that is one of the important points I make in the book. Publicity plans are still being formed. More when I know more.

The Global Market for Human Eggs

Calla Papademas Tells Her Story On Being An Egg Donor