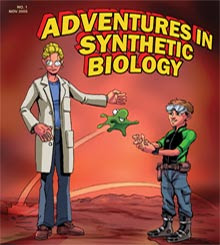 Just because we can do something in science, that doesn’t mean we should do it. That verity should be kept in mind as we ponder the news that scientists have created an artificial bacterium using synthetic genes. From the story:

Scientists in the US have succeeded in developing the first living cell to be controlled entirely by synthetic DNA. The researchers constructed a bacterium’s “genetic software” and transplanted it into a host cell. The resulting microbe then looked and behaved like the species “dictated” by the synthetic DNA. The advance, published in Science, has been hailed as a scientific landmark, but critics say there are dangers posed by synthetic organisms. Some also suggest that the potential benefits of the technology have been over-stated. But the researchers hope eventually to design bacterial cells that will produce medicines and fuels and even absorb greenhouse gases.

I would note that scientists have not made life out of non life. But it is a remarkable achievement, and one that needs to be very carefully controlled because of the potential havoc it could cause:

Dr Helen Wallace from Genewatch UK, an organisation that monitors developments in genetic technologies, told BBC News that synthetic bacteria could be dangerous. “If you release new organisms into the environment, you can do more harm than good,” she said. “By releasing them into areas of pollution, [with the aim of cleaning it up], you’re actually releasing a new kind of pollution.”

And indeed, a pollution that can grow exponentially.

One can see many potential benefits — and ethical perils — of this advance, including in human medicine. But for now, it seems to me the primary concern is safety and the need to protect the environment. But we had better start thinking about how to regulate the technology. The last thing we need is a synthetic life wild, wild, west.