Battle Over “Presumed Consent” in Illinois 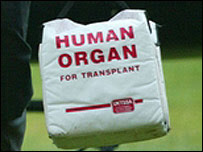 I am sympathetic to the motivation of those who argue that each of us should be presumed by law to want to be an organ donor–increasing the organ supply–but not the method. Known as “presumed consent,” these laws assume silence means consent, making each of us potential donors unless we explicitly opt out–instead of, as now, allowing us to opt in (although family can consent to organ donation even if the deceased did not fill out a donor card, and can usually veto donations if they did ). From the story:

Presumed consent eliminates the need for people to elect to become potential organ donors. Everyone is considered a potential donor, and anyone who objects can opt out. Historically, countries that adopt the policy find only a small percent of the population opts out. When the policy was adopted in Belgium in 1987, less than 2 percent of the population opted out. Risinger, R-Peoria, said people concerned about individual rights clearly have the right to refuse to allow any organ transplantation after their death. He said his legislation is not in final form, and he expects it will be refined with additional input from the public and the medical community. He is planning to hold public hearings on the bill.

The USA is not Europe. We are more individualistic here, and besides, I can think of few things that will sow distrust in the health care system more than presumed consent. Think about it: We already have bioethicists advocating for futile care theory, that is the right to refuse wanted life sustaining treatment based on quality of life judgmentalism, resource allocation, or both. Add in the motive for taking organs to this volatile field–and wary families will become even less trusting, and medical issues will become even more likely to end up in court. Square that if we ever enact explicit health care rationing, or redefine death to include a diagnosis of PVS–as many luminaries in the transplant field advocate. Indeed, I am convinced that with presumed consent, the entire field could become discredited in the people’s minds, whether or not the actual conduct of the transplant professionals warranted the cynicism.

If doctors ever start taking organs without explicit permission–even if allowed by law–there will be hell to pay. And the biggest victim will be transplant medicine itself and the tens of thousands of sick people whose lives are renewed by this important area of medicine. In fact, if laws like this pass, I believe we might even end up with fewer organs, while unquestionably reap much more arguing.

Is There a “Fundamental Right” to Pain Control?