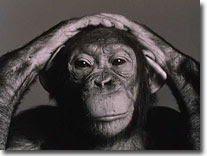 Matthew Hiasl Pan is the name given to him. Nice name except for one major detail. Pan is a 26 year old Chimpanzee. And in the radical animal rights activists mind Pan should be seen as, treated as and protected in law as a person.

Thankfully the high court in Austria decided that only people get people status. Duh! The only agreement with the animal rights activists is that Pan is not a human. But the claim is, if you get to know Pan, you will realize that he is a person.

Not happy with the Austrian decision, they’ve taken their case to the European Court of Human Rights in Strasbourg, France.

Wesley has said, “giving constitutional rights to animals and plants will open Pandora’s Box.
Chimp personhood is a primary goal that animal-right activists seek to attain and then use as a wrecking ball to disintegrate human exceptionalism.” Smith also said “Once a court declares a chimpanzee to be a full person, that ruling would make chimps, in at least some regards, our legal equals. And when it happens, it will be a moral earthquake that will harm humankind profoundly.”

No one at Secondhand Smoke would say that animals should not be treated with respect and treated humanely, however, if it looks like a chimp, acts like a chimp, sounds like a chimp, it must be a chimp! And not a person.

Pushing the Limits on Embryo Research