Just before she left for Italy, Jennifer was interviewed by the online publication ToTheSource about showing the film at “The Meeting” in Rimini, Italy. The interview appears here by permission.

Eggsploitation, winner of the Best Documentary Award at the 2011 California Independent Film Festival, was translated into Italian and shown at The Meeting in Rimini, Italy. The Meeting is one of the largest international cultural gatherings, attracting 800,000 from all around the world. For over thirty years, The Meeting “has bet on the desire and the passion that each man has in his own heart, the desire for beauty, truth and justice.” 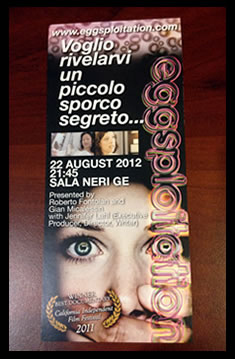 ToTheSource: So, Eggsploitation is going to Italy! How did this come about?

Jennifer Lahl: Last year I attended the famous “Meeting” in Rimini, Italy, and pitched the film to the conference organizers. They said if I translated the film into Italian, they would consider showing it at the 2012 Meeting. My colleague Josephine Quintavalle, with Comment on Reproductive Ethics (CORE) in London, secured the help of a friend in Italy, Gianfranco Amato. They translated the script of the film and then had the film itself dubbed in Italian. I was thrilled when I learned that the film was accepted for this year’s meeting. I can’t wait to see the Italian version on the big screen.

Being shown at The Meeting is a big victory for the film as the Meeting draws more than 800,000 people from all over the world. Attendees include people from various vocations and members of the press, as well as a large youth attendance, who I especially hope will attend the screening. It’s been an amazing ride with this film, and I continue to be amazed with how far and wide it has gone, selling into over 25 countries—and now a version in Italian.

tts: You are a nurse and have your master’s degree in bioethics. What made you become a filmmaker?

Lahl: As a nurse, I was stunned with how reckless the scientific agenda could be with women’s health and safety, and with protecting their fertility. I saw a biotech agenda forging ahead that was highly dependent on women’s bodies. All of the energy seemed to be aimed in two directions: cures for sick people (not a bad thing) and dividing people into religious and political ideologies (not a good thing). During this time I also became aware of the multi-billion dollar fertility industry that has left us with more than half a million frozen embryos, which further fuels bioethical debates. You can’t do embryonic stem cell research without embryos, which requires women’s eggs. The same is true with human cloning.

Stories are powerful tools for communicating truth. In the Gospels, Jesus often teaches in parables, for example. In many ways we are transitioning from a reading, text-based culture to visual and video culture. We learn and are influenced, for the good or the bad, by film.

I’ve spent that last decade writing and speaking about stem cell research, human cloning, and reproductive technologies. Many who heard me speak or read things I had written found me via the internet. Their stories only made me more committed to filmmaking, and many of them are in the films. Filmmaking allows me to share their stories with a much larger audience. I remember testifying on Capitol Hill thinking, who is going to listen to me? But if they heard directly from someone who has been harmed, that would make people listen and act.

tts: How many films have you made now?

Lahl: Three and counting. On the first project I was the associate director of Lines that Divide, which deals with the ethics of stem cell research and cloning. Then I made my writing, directing and producing debut with Eggsploitation. I wrote, directed, and produced it in four months on truly a shoestring budget. My latest film, Anonymous Father’s Day, which examines the ethics of anonymous sperm donation through the stories of women and men who are the children of sperm donors, was just released in December 2011. It is another film completed in less than six months on a very modest budget. I’m happy to report it has just been named an official selection at RIFF (Rome International Film Festival) outside of Atlanta, GA in September. We are in the thick of the film festival circuit now with Anonymous Father’s Day and are hopeful we will win some awards.

tts: What has surprised you the most? 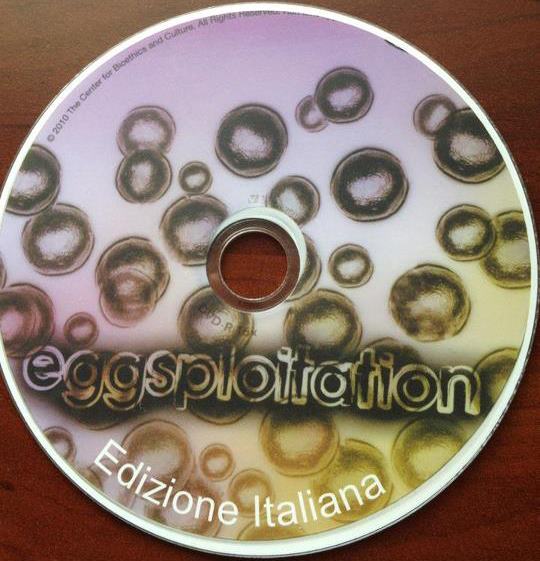 Lahl: Wow, there have been so many surprises. First, that I really enjoy making films. And with my first film where I managed the whole process (Eggsploitation), we won a best documentary award. I still remember the day receiving that news. I must have read the letter 20 times, thinking I was misunderstanding.

Perhaps I was naïve, but I have been surprised at how much controversy Eggsploitation has stirred up. I’ve been viciously attacked in person and in print. I’ve written for tts in the past about the reproductive attorney who has attacked my work and the film who has since been convicted of baby-selling.

I’ve been pleasantly surprised by the degree of support my work has received from pro-choice feminists that I now call friends. I frequently travel and screen the films with feminists who are solidly on the left side of the abortion debates, but who find common ground and common cause on some of the issues and abuses in the infertility industry.

Most importantly, because of the many screenings I’ve done, I have been surprised by how uninformed people are, and yet how quickly they get up to speed on the issues, the ethics, and my concerns after watching the films. I suppose it underscores just how effective a powerful story, told via film, can be.

tts: What’s your next film project going to be? I assume you will make more films?

Lahl: Yes, I have to admit that I have the film bug now. I typically have several ideas floating around in my head which may or may not turn into films. We have a great team at the CBC, and my co-writers and co-producers, Matthew Eppinette and Evan Rosa, and I are always bouncing around ideas. The next film will stay focused on the scandal in reproductive medicine, the exploitation of women, and will turn a bright light on the issue of surrogacy. Most people are unaware of the growing surrogacy market. India is the largest market right now. People from all over the world go to India to pay poor women to gestate babies for them. The second largest market is right here in the USA, with many military wives serving as paid surrogates. We are creating a new subclass of women—paid breeders. I am already in contact with several women who have been surrogates, and I look forward to allowing them to tell their stories in a new film.

Biggest Winners and Losers of 2019

Assisted Suicide case in Supreme Court not about ‘States Rights’

3 Things You Can Do