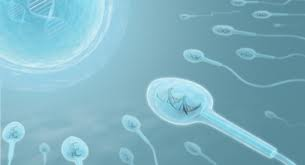 The headline seemed controversial, but I don’t think it is. Scientists have removed male germ cells from the testes of mice and transformed them into sperm, from whence they come in the normal functioning male body. From the Telegraph story:

Researchers in Germany and Israel were able to grow mouse sperm from a few cells in a laboratory dish. In a world first a team headed by Professor Stefan Schlatt, at Muenster University in Germany, were able to grow sperm by using germ cells. These are the cells in testicles that are responsible for sperm production. Scientists grew the sperm by surrounding the germ cells in a special compound called agar jelly to create an environment similar to that found in testicles. Prof. Mahmoud Huleihel, who also grew the sperm at Israel’s Ben Gurion University in Beersheba, said: “I believe it will eventually be possible to routinely grow human male sperm to order by extracting tissue containing germ cells from a man’s testicle and stimulating sperm production in the laboratory.”

In other words, scientists may one day be able to create sperm from the cells that usually perform this function. As far as I am concerned, that is akin to, say, wearing glasses in that it merely recreates a normal function.

What will be controversial is if sperm can ever be made from normal body cells, either through induced pluripotent stem cells or cloning. At that point, a woman might be able to “father” a child, perhaps even her own. Some might say people would never do that. Ha! Anyone who thinks that has been a Rip Van Winkle for the last several decades. The time to regulate such things is now, but in our anything goes biotech sector, don’t count on it ever happening.

Euthanasia: The Dutch Fall Off a Vertical Moral Cliff