The Schindlers Were Right to Insist on Tests for Terri 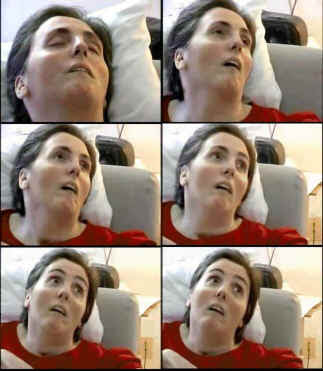 Full disclosure: I am very close with the Schindler family. (Terri’s siblings and mother. Her father Bob died last year, his health destroyed by grief over what happened to his beloved daughter.) They are as good and decent as people get. I know the lawyer who represented them for most of the case. She’s honest and true. I know Fr. Frank Pavone. Agree or disagree with his strong pro life positions, he has integrity. I have talked with several people who spent a lot of time with Terri Schiavo. All told me she could react, particularly, that she could hear and respond to loving talk (as in the famous photo of her smiling broadly as she is greeted by her mother or her opening her eyes wide on request, as shown in the photo sequence to the left).

But she had been diagnosed as PVS and the courts refused to allow that determination to be shaken during the ordeal. (The family made a mistake by stipulating to it during the original trial. But that was because of costs and a naive disbelief that a court would order a human being to be dehydrated to death.) Indeed, when it was clear that Terri would be lying in bed for a year pending appeals, the family begged Judge Greer to permit sophisticated brain scanning that had never been used on her before. It couldn’t have hurt her, and it might have shown something. But stubbornly, he refused. I will go to my grave believing the judge knew what he didn’t want to know.

Now, a “surprising” new study has found that many supposedly PVS patients have reactive brains. From the story:

Many of the patients were labeled with the same grim diagnosis: “vegetative state.” Their head injuries, teams of specialists had concluded, condemned them to a netherworld — alive yet utterly devoid of any awareness of the world around them. But an international team of scientists decided to try a bold experiment using the latest technology to peek inside the minds of 54 patients to see whether, in fact, they were conscious. One by one, the men and women were placed inside advanced brain scanners as technicians gave them careful instructions: Imagine you are playing tennis. Imagine you are exploring your home, room by room. For most, the scanner showed nothing. But, shockingly, for one, then another, and another, and yet two more, the scans flashed exactly like any healthy conscious person’s would. These patients, the images clearly indicated, were living silently in their bodies, their minds apparently active. One man could even flawlessly answer detailed yes-or-no questions about his life before his trauma by activating different parts of his brain. “It was incredible.”…

“This should change the way we think about these patients,” said Nicholas D. Schiff, an associate professor of neurology and neuroscience at Weill Cornell Medical College in New York City. “I think it’s going to have very broad implications.”

But it won’t. The bioethics mainstream has rejected the equality/sanctity of humanlife for the so-called quality of life ethic. It began with the odios advocacy of Joseph Fletcher in the Hasting’s Center Report back in 1972, claiming that the inability to communicate meant that one had lost humanhood (now called personhood). Thus today, not only unconscious but conscious patients are dehydrated to death in all fifty states and it is shrugged off as medical ethics.

Back to Terri: As happens every time stories like this come up, the reporter hastened to assure readers that Terri’s case was somehow “different:”

The research inevitably raised questions about patients such as Terri Schiavo, a Florida woman in a persistent vegetative state whose family dispute over whether to discontinue her care ignited a national debate over the right-to-die issue that led to congressional intervention in 2005. Schiavo’s brother, Bobby Schindler, said the new study highlights the limits of medicine to provide an accurate diagnosis. “I wish this could have been used on my sister to see what could have been done to help her,” Schindler said in a telephone interview. But Owen, Schiff and other experts stressed that the research does not indicate that many patients in vegetative states are necessarily aware or have any hope of recovery. Many, like Schiavo, have suffered much greater danger to their brains for far longer than the patients in the study. “In some cases, the damage to the brain is so severe that it is simply inconceivable they could produce any responses,” Owen said.

Perhaps, but thanks to Judge Greer’s intransigence, we will never know what her brain scan would have shown. And don’t bring up the autopsy: The report said her brain was consistent with either a PVS or minimally consciousness, and moreover, that such decisions are clinical, not subject to being decided upon autopsy.

But this is the point. Conscious or unconscious, people should not have to earn the right to receive basic sustenance. What we did to Terri Schiavo was a blight on the legal system and bioethics. Pretending otherwise won’t make that stain go away.