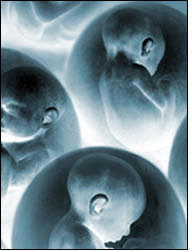 My piece just out now on the egg sharing scheme proposed for the shortage of eggs in California.

In an effort to get more eggs into the hands of cloning researchers, the president of the California Institute of Regenerative Medicine (CIRM), Alan Trounson, recently suggested the solution to the human egg shortage is to implement an “egg-sharing” program. Rule number one, always BEWARE of euphemisms!

At the February 28, 2008, the CIRM Standards Working Group, Trounson is quoted as saying , “The demand for oocytes may be way beyond what we can possibly deliver,” and

“Women are not prepared to go through those procedures without some form of compensation.” Of course, Trounson’s complaint is in direct response to the number of grant applications CIRM is receiving for cloning research requiring human eggs. You see, this was never really about all those surplus embryos . read full article here.

Pink for Girls — Blue for Boys