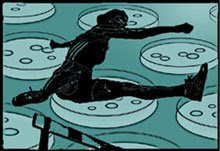 I just came across this piece in Nature, by Bruce Goldman. It levels the playing field with the 10 year head start embryonic stem cell research had over iPS cell research. Goldman does a good job of outlining 3 applications of iPS cells. First, they are ready and able to be used right now to better understand and compare cell differentiation with normal and diseased cells.

Second, iPS cells win hands down for patient specific matched cells because they use your own cells and reprogram them to match – you!

Finally, and not yet ready for prime time, is the coveted regenerative medicine capacity that iPS cells may have for the future.

Not a bad breakthrough.