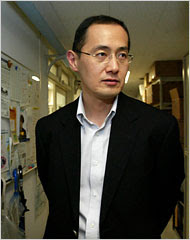 WOW! I now have another to add to my hero list. Today’s science section of the New York Times has a great piece highlighting the research of Dr. Shinya Yamanaka at Kyoto University in Japan.

Dr. Yamanaka said this, “When I saw the embryo, I suddenly realized there was such a small difference between it and my daughters,” said Dr. Yamanaka, 45, a father of two and now a professor at the Institute for Integrated Cell-Material Sciences at Kyoto University. “I thought, we can’t keep destroying embryos for our research. There must be another way.”

And he said this of his research, “he had never handled actual embryonic cells himself, and the American lab uses them only to verify that the reprogrammed adult cells are behaving as true stem cells.

“There is no way now to get around some use of embryos,” he said. “But my goal is to avoid using them.”

William E. May, Rest in Peace