In July, Alison Young wrote a compelling piece for USA Today on maternal mortality in the United States. The article tagline alone would make any healthcare professional cringe: “Hospitals know how to protect mothers. They just aren’t doing it.”

Ouch. I have to admit, as a labor and delivery nurse who genuinely cares about each and every patient, my defenses were up in the first few sentences of Young’s article, but I read on.

She asserts that the United States is “the most dangerous place in the developed world to give birth . . . each year, more than 50,000 are severely injured. About 700 mothers die.” Knowing that many of these injuries and deaths are preventable, this is sobering data. What are we doing wrong?

According to Young, the bottom line is that there is a “lack of attention to safety recommendations” at hospitals around the country. She writes, “when hospitals work with well-organized state-wide quality groups – that help them train staff, track data and benchmark against peers – care can improve faster.”

Ultimately, it is a lengthy, but well-written article about the deficits in care among hospitals across the country. Young gives tragic examples of how families have suffered when they should have been celebrating new life. These stories crush my heart.

Please read the entire article. Become educated on the risks of childbirth in this country, and what we can and should do to improve the safety of every childbearing woman.

Now, of course, I want to shift topics ever-so-slightly. Young doesn’t mention it, but I want to add surrogacy and artificial reproductive technologies (ART) to our discussion. Did you expect me not to?

In her report, it seems Young is lumping all pregnancies together in one article to demonstrate how unsafe giving birth is in the United States. It is important to note that Young does not make a distinction between “natural” or unassisted pregnancies and pregnancies involving in vitro fertilization or gestational surrogacy. These pregnancies are usually classified as higher-risk pregnancies, meaning they are more likely to pose a risk to the health of the mother, fetus, or both.

A graphic accompanying the article shows that from “1990 to 2015, the number of maternal deaths per 100,000 births in most developed nations has been flat or dropping. In the U.S., the rate has risen sharply.” The countries compared with the United States are Germany, France, Japan, England, and Canada. Interestingly, Germany and Japan ban surrogacy altogether. In France and Canada, only altruistic surrogacy is legal.

In the United States, however, each state makes their own laws regarding artificial reproduction and surrogacy. Here again, Young does not make distinctions about childbirth risks between states. Do states that allow surrogacy have higher rates of severe blood pressure or hemorrhage? Are the risks for pregnancy and childbirth in the United States greater because so many states provide every possibility for a woman to have a child?

Research is already showing us that embryos created from IVF and carried by a gestational surrogate have increased incidences of preterm birth, maternal gestational diabetes, hypertension or high blood pressure, and placenta previa, compared with births conceived spontaneously and carried by the same woman. Surrogate pregnancies are also more likely to end in cesarean section rather than vaginal birth (which equates to more risks to both surrogate mother and baby, including, but not limited to hemorrhage). These surrogates are at a higher risk for precisely the concerns that Young writes about. Do we care? We should.

Further, I am learning that in many situations, women are choosing to hire surrogates, not because they are infertile, but because they want to mitigate their own pregnancy and childbirth risks. Such people are willing to create a high-risk situation for another woman, possibly creating unsafe health outcomes and increased health care costs. And doctors are encouraging it!

Young writes, “together, these documents and interviews reveal a stunning lack of attention to safety recommendations and widespread failure to protect new mothers.” Notably, fertility doctors are making ways for – and even recommending that – mothers well past childbearing age have babies. But it seems we aren’t as worried about those risks!

Young quotes Dr. Steven Clark, a childbirth safety expert from Baylor College of Medicine, as saying “Our medicine is run by cowboys today, where everyone is riding the range doing whatever they’re wanting to do . . . It’s a failure at all levels, at national organization levels and at the local hospital leadership levels as well.” The same quote could be applied to surrogacy and to ART.

In fact, Marcy Darnovsky, the executive director of the Center for Genetics and Society, was quoted in another USA Today article from 2015. She stated, “The United States is the Wild West of the fertility industry.”

Surrogacy and ART continue to produce a plethora of ethical, medical, and political issues that this country refuses to protect women and children from.

In my short career I have been blessed to work at facilities that do implement the important safety recommendations Young discusses. I have had the privilege to work with nurses and doctors that aren’t simply “ignoring” best practices or “basic tasks.” This does not mean that I have been immune to bad outcomes and tragic cases. They still happen. We still need to improve.

Can we improve when we are constantly creating new ways for all women to get pregnant? Will we improve if #BigFertility values dollars over outcomes? 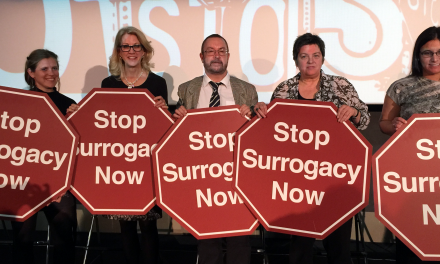