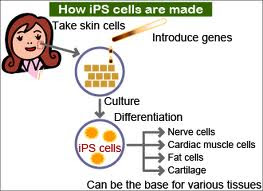 Another big breakthrough on the IPSC front: Skin cells from a patient with Parkinson’s — a variety caused by a genetic condition — have been turned into neural cells, and then studied as the Parkinson’s destroys the tissue. From the story:

There are no cures because research has been very hard to do, for two specific reasons: Only humans get the disease, so laboratory animals aren’t good models for testing. And it is impossible to extract cells from deep inside the brains of patients. By the time patients die, the brain cells are dead, too. “It is a huge bottleneck to research,” Langston said.

But a new technique has changed all that. By inserting certain genes into skin cells, scientists can turn back the clock, causing them to revert to “induced pluripotent stem (iPS) cells” — with embryonic-like traits. Then they are coaxed into becoming mature cells, such as neurons. This “disease in a dish” technique holds promise for not just Parkinson’s but a whole range of other disorders, including Type 1 diabetes, Huntington’s disease, Down syndrome and muscular dystrophy. Stanford scientists have even used the technique to build small faulty hearts to better understand rhythm disorders.

Genia Brin, an applied mathematician and retired research scientist at NASA’s Goddard Space Flight Center, was considered to be the perfect donor because she has the genetic form of the disease. Scientists reason that they would have a better chance of replicating the disorder with her cells, rather than the cells of someone with a more sporadic form of the disease. While rare, her form of the disease behaves just like the more common form, so it might offer important lessons.

This is what was promised from human cloning research. That hasn’t worked — and we shouldn’t try. That ethical line is easier to defend now that IPSCs are proving so valuable without having to risk women’s health by harvesting their eggs, or creating, and then destroying, embryos.