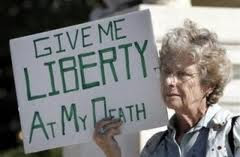 I make it a point of not criticizing people who commit suicide. None of us knows what might cause such despair that we decide to terminate ourselves. Indeed, my focus is on how a loving community responds to the suicidal despair of our brothers and sisters, not on judging people who have died.

But I am going to make an exception in this particular story. Over the years, I have noticed an utterly “it’s all about me” orientation among the more doctrinaire assisted suicide types–not people who may support legalization in limited cases (not knowing it is a false premise)–but the committed activists, the kind who pour over stories of assisted suicides, attend how-to-commit-suicide seminars, and get the vapors at suicide machine conventions. Not only are such assisted suicide fanatics disturbed, but often their actions cause great harm, not only to themselves but to society itself, e.g., the Final Exit Network members who helped a mentally ill woman kill herself in Phoenix.

An Arizona murder/suicide “death with dignity” shows what happens when one commits oneself wholeheartedly to ideological hemlock. From the story:

An Arizona couple followed through with a decades-long plan to end their lives before the ravages of old age took their toll. Lansing C. Holden, 83, and his wife, Carol, 78, were found shot to death July 26 in a remote cabin south of Pagosa Springs in Archuleta County. Archuleta County Coroner Carl Macht on Wednesday said the deaths had been classified as a murder-suicide…The Holdens were members of the Final Exit Network, a nonprofit that promotes “the right of every adult to a peaceful, dignified death,” according to its website. Members receive consultations and advice about suicide methods. She wore an orange plastic bracelet that read, “Do not resuscitate” from the Hemlock Society, a national right-to-die organization. Such groups typically recommend less-violent means of death, like a lethal dose of medication, rather than a gunshot…

The Holdens were in fairly good condition considering their age, Macht said. Mr. Holden had the beginnings of heart disease and she had digestive issues…They left behind a suicide note signed by both participants and notarized March 3, 2010, in Arizona. The letter read: “Many years ago we decided to be in charge of the timing of our own death. Hopefully it would be when the lines of normal aging, health problems and finances all crossed. “It is our intention to avoid the indignities of prolonged nursing home care or terminal hospitalization. Unfortunately, there is little chance of ‘death with dignity’ under present laws which do not recognize our right to die a peaceful and painless death at the time and place of our own choosing. “We have concentrated on the quality rather than the quantity of our lives together, and now it is time to move on while we are still in control. We want our bodies to be cremated directly and no religious or memorial services.”

Oh, and get this bit of utter selfishness–making a cleaning woman find their bodies:

The couple e-mailed the homeowner before the shooting and asked that a cleaning lady be sent by. She discovered the bodies July 26 – about a day after they had been shot. “She was really shaken up,” Macht said.

This is no different than the double assisted suicide committed at Dignitas in Switzerland (more planned), or the recent well publicized double suicide in Wisconsin. And it is fully in keeping with Canadian assisted suicide advocate Ruth Von Fuchs who, for example, lauds suicide as a prophylactic against future suffering. And indeed, it is just like the suicide of my friend Frances, who killed herself o her 76th birthday under the influence of Hemlock Society literature–which is what dragged me into this field of advocacy in the first place. Here’s what I wrote about that pointless death in my first anti assisted suicide piece in Newsweek, published June 28, 1993. From my column, “The Whispers of Strangers:”

Frances once told me that through her death she would be advancing a cause. It is a cause I now deeply despise. Not only did it take Frances, but it rejects all that I hold sacred and true: that the preservation of human life is our highest moral ideal; that a principal purpose of government is as a protector of life; that those who fight to stay alive in the face of terminal disease are powerful uplifters of the human experience.

Of greater concern to me is the moral trickledown effect that could result should society ever come to agree with Frances. Life is action and reaction, the proverbial pebble thrown into the pond. We don’t get to the Brave New World in one giant leap. Rather, the descent to depravity is reached by small steps. First, suicide is promoted as a virtue. Vulnerable people like Frances become early casualties. Then follows mercy killing of the terminally ill. From there, it’s a hop, skip and a jump to killing people who don’t have a good “quality” of life, perhaps with the prospect of organ harvesting thrown in as a plum to society.

And that is precisely what is happening.

This couple didn’t just kill themselves, they did it in a way to create a public controversy. That means we have a right to comment about what they did and what they believed. They didn’t just devastate their family, they hurt society. That makes what they did triply wrong.

Of Sperm and Smart Phones

The Resistance: Sex, Lies and Greed