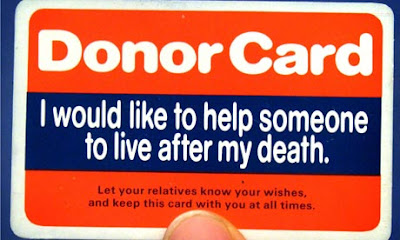 The Washington Post has a story about a pilot program to identify donatable organs from the cadvers of people who die in emergency rooms. From the story:

Using a $321,000 grant from the Department of Health and Human Services, the emergency departments at the University of Pittsburgh Medical Center-Presbyterian Hospital and Allegheny General Hospitalin Pittsburgh have started rapidly identifying donors among patients whom doctors are unable to save and taking steps to preserve their organs so a transplant team can rush to try to retrieve them. Obtaining organs from emergency room patients has long been considered off-limits in the United States because of ethical and logistical concerns. This pilot project aims to investigate whether it is feasible and, if so, to encourage other hospitals nationwide to follow. So far, neither hospital has yet gotten any usable organs. “This is about helping people who have declared themselves to be donors, but die in a place where donation is currently not possible,” said Clifton W. Callaway, an associate professor of emergency medicine at the University of Pittsburgh who is leading the project. “It’s also about helping the large number of people awaiting transplants who could die waiting because of the shortage of organs.”

The organ shortage is real and we should do what we can — within proper ethical parameters — to shorten waiting times. But, as the old saying goes, the devil is in the details. The questions about this approach are real and substantive:

One concern is that under the program, doctors will take organs from people who have agreed to become donors by checking off a box on their driver’s license or by signing up on a state registry, and will not seek a family member’s consent if one is not present. “The problem is there’s no real informed consent in driver’s license designations,” said David Crippen, an associate professor of critical-care medicine at the University of Pittsburgh. “The computer asks, ‘Would you like to be a donor — yes or no.’ . . . Many people may be consenting to something that they really don’t understand.”

Some experts worry that the practice could send subtle signals to doctors and nurses that could influence how hard they work to save patients. “When you do this stuff in such close proximity to treating the patient, the people in the emergency room will quickly start to think, ‘This is a potential organ donor,’ even when they are treating the patient,” said Michael A. Grodin, a medical ethicist at Boston University. “People are going to wonder, if they are being treated in the ER, ‘Are the transplant people going to swoop down to get my organs?’ “

Imagine the paranoid questions that could arise in the minds of grieving loved ones in such circumstances — particularly if “presumed consent” ever became law, that is, we would all be donors unless we explicitly opted out. On the other hand, the plans proponents assure us that such concerns would be prevented:

The project’s organizers have taken several steps to address the concerns, Callaway said. No one will check whether a patient is an organ donor until after the patient has been declared dead, he said. The medical personnel involved in trying to save patients will be completely separate from those involved in obtaining their organs. “If I were simultaneously given the task for being part of the transplant team, and that was in the back of my head, I might have some conflicting priority that your death may benefit someone else,” Callaway said.

But many questions remain:

Some critics question whether patients pronounced dead in the emergency room meet the official criteria for organ donation, or whether there are enough safeguards in place in case someone pronounced dead unexpectedly revives — which can happen, though very rarely…”There’s no consensus regarding how long CPR must be performed before death is determined as irreversible. In other words, when in the resuscitation process does the patient transition from being treated as a patient to a donor?” Whetstine asked. “Are such patients really dead after resuscitation efforts end and after a time interval of two minutes of cessation of circulation elapses?”

But Callaway dismissed any suggestion that the patients technically may not be dead. Only patients for whom everything has been done, and who it is clear cannot be revived, will be considered, he said. “This is donation after cardiac death. No heartbeat. No breathing. Dead. Clinically dead. There is an unambiguous death,” he said.

That’s the key. I don’t know enough about this pilot program to express an opinion. If it could be done ethically — people who clearly had consented to donation, who were medically treated properly, and only had organs procured when there was no question of death — it might work.

But these are trecherous waters. The trust of the public in organ donation is very much at stake in this pilot program. I hope its overseers tread very carefully and conservatively.

Cord Blood Banking is a Great Way to Go!