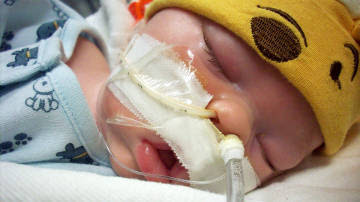 I received word last night that Baby Isaiah, the subject of a bitter futile care case in Canada, died in his parent’s arms after they decided the time had come to stop treatment. They made that decision — not the doctors and not the courts — based on the bad news they received from medical consultants who had reviewed Isaiah’s case.

The media is reporting that happened. From the story:

The parents, who are both in their early 20s, thanked Taylor and the staff for their help. They also paid tribute to thousands of people worldwide who rallied behind them on social networking sites such as Facebook. Some right-to-life and religious groups in Canada and the U.S. also expressed their support. The parents said the outpouring gave them strength in court and when they visited their son each day in hospital. They were surrounded by aunts, uncles and grandparents as Isaiah took his last breath.

Alberta Health Services initially tried to limit the time the Mays were requesting to seek a second medical opinion on Isaiah but then worked closely with the family to make it happen. The organization expressed its condolences to the family. “Physicians and staff who have been involved in caring for baby Isaiah were touched by the May family’s strength. Our deepest sympathies go out to the family.”

No life is unworthy of living. Isaiah was deeply loved by his parents and his circumstances challenged us about how to best care for people with the most serious illnesses and disabilities. I believe that the doctors who wanted to stop treatment, and those who fought to maintain it, earnestly sought what they considered best for the child.

But many futile care cases are not really over medicine, but rather, conflicting values. When those are the stakes, the tremendous benefit of the doubt should go to patients and families, not bioethicists, physicians, or society. Otherwise, the “right to die” — actually the right to refuse unwanted medical treatment — could easily mutate into the duty to die, by having life-sustaining treatment denied. Alas, that is precisely what some in bioethics desire.

Isaiah’s parents will at least know that the decision to stop treatment was theirs, and not that of others. I hope it brings some consolation as they enter a time of grief. Our most sincere sympathies.

Reproductive Coercion and the New Eugenics