Legalizing Euthanasia Would Interfere With Treating “the Elderly as Individuals” 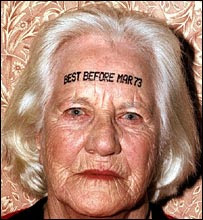 The awful (and tragic) comments of novelist Martin Amis, suggesting that “suicide booths on every corner” would be a splendid solution to the purported problem of the “stinking” elderly– my take here–continues to provoke comment. The Times of London reports the reaction of the 92-year-old writer Diana Hathill, who urges that the elderly be treated as individuals. From the story:

The author of five volumes of memoirs — the most recent, Life Class, was published last month — is not against euthanasia. “I would like to think if I wanted to end my life I could. People shouldn’t have to beg to die.” However, she says that is different from Amis’s view that people should be bumped off when they are no longer useful to society. “You have to have some control. People don’t want to be burdens, everyone I know who is old frets that their family has to cope with them but they don’t really want to die before their time.” Animals sometimes receive better treatment than old people, she thinks. “The British like animals because they are simple creatures, they give them clothes, furniture, gourmet pet food, it’s getting ridiculous.”

The elderly should be treated as individuals, she says. “You shouldn’t expect them all to retire at a certain age, I carried on working until I was 75. One does eventually go off the boil but you shouldn’t take the pan off the hob too early.” It was, the writer says, agonising moving into a retirement home. “Quite dreadful, but now it’s rather nice. Some people here are very old indeed, but you suddenly discover they are still very interesting.”

Hathill is talking at cross purposes with herself. On one hand she says she rejects Amis’s thesis, but then accepts it in the next breath, just not as crassly.

The problem of elders feeling a burden shouldn’t be understandable. Rather, it should be opposed. The reason so many accept the “burden” meme is that they hear the message that their lives, at some point, aren’t worth living and as Hathill points out, become too expensive to maintain. But legalizing euthanasia promotes that very dehumanization of the elderly. You can’t say treat them as equals with the rest of society, but also assist their suicides. That is akin to saying, don’t smoke, but if you do, use filter cigarettes: What you end up with is people smoking.