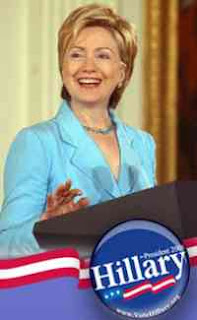 Thankfully my blog is ‘my own thoughts’ so I can say what’s on my mind. And that is, I’m quite uneasy about ’08. What’s a girl to do with the candidates who will most likely, probably, as much as the polls can predict, get their party’s nomination? Especially given the fact that I spend most of my waking hours working in the bioethics world and I worked in health care for some 20 years. How’s that joke go? If the U.S. gets universal health care, where will the Canadians go for medical treatment? Seriously though!

Today there was this news: “Hillary Clinton Would Overturn Bush’s Executive Order on Stem Cell Research if Elected President”

Am I just waiting for the last 10 years of my life’s work to go flushing down the toilet? Or should I be holding my breath for that third party candidate to come and save my day?

Another one for the weird science category