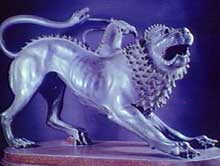 While I was in Scotland last week for meetings on human cloning and human commodification, the Scotsman ran a headline, “Scientists set to create human-rabbit hybrid” National Geographic news ran a piece on animal-human hybrids last January which discussed the ethical concerns of produciing chimeras. It is worth reading and following their great links. This notion of chimeras, a mixture of two or more species in one body, has been with us since Greek mythology, which named a monster with a lion’s head, goat’s body, and serpent’s tail, Chimera. But what does it mean for the human future if chimeras are made for art? Like Alba, the flourescent bunny. For healing and treating diseases? Like transplanting pig valves in our hearts. For our curiosity? Because we can. . . Obviously this is a human endeavor since pigs, cows and rabbits aren’t wondering how to mix it up.

You Can’t Have Resuscitation!