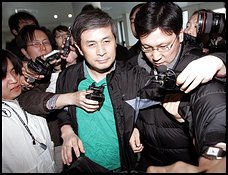 With all the controversy surrounding South Korean’s cloning star, Hwang Woo Suk, I am hopeful that concerns for the dignity and safety of human subjects will get a fair hearing. Hwang’s most recent troubles (causing him to spend a few days in the hospital because of exhaustion) are focused on allegations that his human embryo cloning research contains fabricated data.

Dr. Gerald Schatten, of the University of Pennsylvania, who most famously and recently divorced himself from collaboration with Hwang, has asked that his name as co-authored be removed from their stem cell paper. OUCH! Dr. Schatten said, “My careful re-evaluations of published figures and tables, along with new problematic information, now casts substantial doubts about the paper’s accuracy,” Schatten wrote in a letter to Science released late Tuesday by the university.

My colleagues, Dr. Nigel Cameron and Dr. Tina Stevens have written an op-ed in yesterday’s SF Chronicle, calling for a little Seoul searching in California, as we continue the legal challenges against the $3bn boondoggle, called prop. 71. The best line in their piece is, “When the world’s top cloner becomes the first international scandal of the “biotech century,” we need to start asking questions.”

The High Costs of High-Tech Babies

Should Doctors Tell Patients When Death is Imminent? It Depends on the Patient