Palliative Sedation Not = To Terminal Sedation/Euthanasia 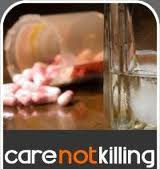 The “It’s Okay to Kill the Sick” Crowd intentionally blur distinctions and destroy definitions in their quest for legalizing/normalizing doctor-prescribed death and even, Final Exit Network ghoul helium terminations. It really disgusts me.

One of their favorite moves in this regard is to intentionally and wrongfully conflate palliative sedation — that is sedating a dying patient at the end of life who is experiencing intractable pain or symptoms — with both euthanasia — fast killing the patient — and terminal sedation — slow killing the patient by inducing coma and withdrawing food and water. As I said, it really disgusts me.

A good piece in the Journal of Pain & Palliative Care Pharmacotherapy 201 2;26:30-39 shatters that lie. First, it notes that in palliative sedation, the point is to use the least amount of sedative to accomplish the needed palliation. From “Review of Palliative Sedation and Its Distinction From Euthanasia and Lethal Injection” (abstract link only):

Ideally, the level of palliative sedation is provided in a fashion that is titrated to a minimal level that permits the patient to tolerate unbearable symptoms, yet the patient can continue to periodically communicate . . . The three most common levels of providing PS include mild, intermediate, and deep. When mild sedation is used, the patient is awake and the level of consciousness is lowered to a somnolent state, with verbal or nonverbal communication still possible. With intermediate sedation, the patient is asleep or stuporous and can still be awakened to communicate briefly. The third level is deep sedation, which refers to the patient being near or in complete unconsciousness and does not communicate verbally or nonverbally. Besides regulating the degree of sedation, palliative sedation may also be provided intermittently or continuously . . .

Well, let’s stop so we don’t get too technical.

The points to take away from the above are 1) PS is individualized to the patient’s needs, 2) the point isn’t to end the life of the patient, and 3) levels of sedation may vary in the same patient from time to time. In contrast, euthanasia kills the patient with a lethal injection. And “terminal sedation” is merely the imposition of coma and withdrawing artificial nutrition and hydration, sometimes without actual medical need and/or to make it easier for care givers — as in the much abused Liverpool Care Pathway in the UK.

According to the article, the average PS time before death, in cases in which total coma is clinically required is 1.5 to 3.1 days, not enough time to die by dehydration, which generally takes about two weeks. Also, the AMA urges practitioners to use PS only as a “last resort,” which certainly isn’t the case with E and TS, which are done for non medical reasons.

The authors also point out that the intentions between PS and E/TS are mirror opposites:

Palliative sedation is not a euphemism that is morally equivalent to euthanasia, nor is it “slow euthanasia,” or physician-assisted suicide (PAS). There is a sharp distinction between euthanasia and PS or PAS and PS, the distinction between the three can be ascertained by recognizing the primary intention and outcome of each measure. Although PAS and euthanasia are intended to relieve suffering, it is accomplished by causing death, whereas PS is provided in a proportionate manner without an intention of causing death. The primary intention of euthanasia and PAS is the death of the person-with relief of suffering occurring as a secondary (incidental) result, whereas with PS the primary intention is relief of suffering-with death being a secondary (incidental) result. Slow euthanasia and PAS specifically involve the intent to end life deliberately with lethal (nontherapeutic) doses of drugs, or with rapid administration of drugs, that exceed the amount needed to alleviate the symptoms. When death unintentionally occurs following a proportionate administration of drugs in PS, the patient dies from the underlying illness and the death certificate does not list the cause of death as “drug overdose.”

DeGraeff and Dean and Morita et al, both summarized how there are three reasons why palliative sedation is distinct from euthanasia: It has the intent to provide symptom relief, it is provided in a proportionate manner, and death of the patient is not a criterion for success of the treatment.

Bingo! But don’t expect accuracy in advocacy or proper nuance from the euthanasia crowd. They want what they want and they are more than willing to sow unnecessary confusion in order to to get it.