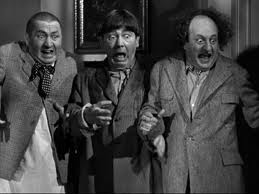 So, a pal and I go to see The Three Stooges last night: Woob! Woob! Woob! Woob! I just wanted to forget the world and revisit my long lost boyhood when my friends and I would roar at the Stooges on TV after school.

The movie was almost perfect. It really captured the spirit of the Stooges shorts: The boys, purehearted and earnestly, if utterly ineptly, trying to do what is right and getting into terrible trouble. Hilarious and perfectly executed slapstick.

Then, klunk. The plot deals with the boys leaving the orphanage in which they were raised for the first time to save it from foreclosure. They have to raise $830,000 in 30 days. They come to the attention of the villainess — who reads the Weekly Standard in a not so subtle jibe at conservatives. She and her boyfriend hatch a plot to hire the Stooges to knock off the woman’s rich husband. In a mix-up of identities too complicated to go into here, the boys are convinced that the boyfriend is the husband and that he wants to be killed “by surprise” because he is terminally ill and will become a “vegetable.” If they succeed, the new widow will pay them $830,000.

And they try. They really try to kill him — and almost succeed (in a very funny slapstick turn in which they throw him in front of a bus) before learning they are being played for chumps. I don’t recall the original Stooges ever trying to kill anyone. Yet our contemporary updated boys — pure in heart and innocent to the ways of the world — don’t even blink an eye that it might be wrong to kill somebody because they are sick and want to die. Oh, and here’s another ironic note: The orphanage for which they would be paid blood money to save is run by Catholic nuns.

At the end of the movie two stuntmen appear to tell kids that the hammers with which the characters hit each other are rubber and warn them not to poke their friends in the eyes. Yet these same children have been sent a not subtle message that euthanasia is just fine and dandy. I don’t even think it was intentional. It is just the culture-of-death smog permeating everything. Nyuk. Nyuk. Nyuk.

Not Wrong to Fund Research Based on Ethics