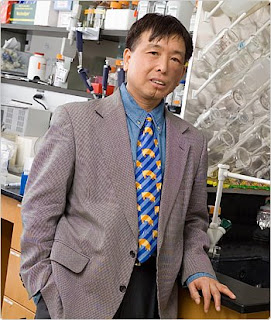 From the Associated Press and Los Angeles Times Feb. 9, 2009

Xiangzhong “Jerry” Yang, a stem cell scientist who successfully cloned
the first farm animal in the United States, has died. He was 49.

Yang, director of the Center for Regenerative Biology at the University
of Connecticut, died Thursday at Brigham and Women’s Hospital in Boston
after a long battle with cancer, school spokesman David Bauman said.

In 1999, the China-born Yang put UConn on the world’s scientific map
when a Holstein named Amy was born in Storrs. She was the first cloned
farm animal in the United States. The world’s first cloned animal was
Dolly the sheep, created in 1996 in Scotland.

Yang died before achieving one of his dreams: the cloning of a human
embryo for potentially lifesaving stem cells.

Embryo Value Debated in Europe Too