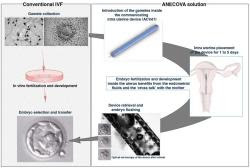 You wouldn’t believe me if I told you this. So read it for yourself here. A few quotes to give you the flavor.

“Trials of a “silicon womb” that holds test-tube embryos inside the womb to expose them to more natural conditions will shortly begin in the UK. Researchers say the new device may produce better quality embryos and reduce the need to harvest so many eggs from infertile women.

In standard IVF, eggs harvested from a woman are fertilised in the lab and allowed to develop in an incubator for 2 to 5 days. The healthiest embryos are chosen to be transferred into the uterus.

The new device allows embryos created in the lab to be incubated inside a perforated silicon container inserted into a woman’s own womb. After a few days, the capsule is recovered and some embryos are selected for implantation in the womb (see image, top left)

Embryos incubated in the lab must have their growth medium changed every few hours to provide new nutrients and get rid of waste. The new device provides a more natural environment.”

Do the math ladies

The Trouble With Futile Care Theory