The New York Times today has an article on Nepal’s ban on surrogacy, which went into effect last September. You may recall headlines and pictures post-earthquake of poor Nepalese women left stranded while gay couples from Israel took their babies out of the country.

Today’s headline is “Nepal Bans Surrogacy, Leaving Couples With Few Low-Cost Options,” and the article’s contents are all about the money.

The voices interviewed for the piece, except one lone critic who worried about poor women being taken advantage of, were among the usual suspects of pro-regulation voices parroting the talking points of pro-surrogacy advocates.

Saving people money, lifting poor women out of poverty by trading on their reproductive capacities, helping couples avoid pricey surrogacy arrangements in America, all the while ignoring the risks to women and to children.

Let me be clear: surrogacy in all its forms hurts women and hurts children.

Those in favor of regulation refuse to discuss the fact that using women and children in this way is simply incompatible with human dignity. It is a violation.

Bought, paid, purchased; part of the very definition of human trafficking—the trade of human beings. Join us in our efforts to #StopSurrogacyNow. 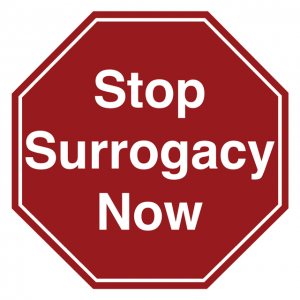 We Are Dreaming Big