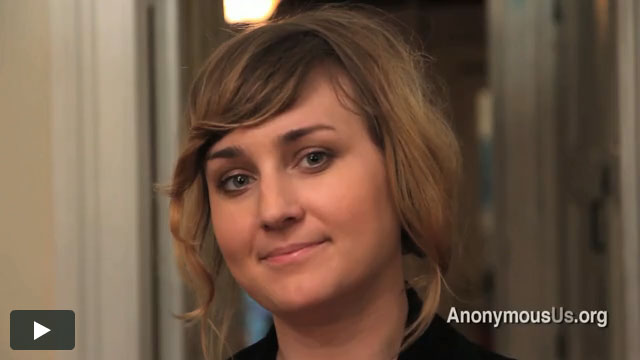 When I first met Alana, I was at Columbia University Law School screening my documentary film, Eggsploitation. I had done an earlier screening during the day at Fordham University Law School and noted at both of these screenings “they” were following me. They being the women who typically attend my screenings to give me pushback and reject and/or discount the message of the film, that “donating” (often times it is selling) your eggs is risky and potentially quite harmful to young women. These women who follow me around are someway involved in the fertility industry. They are reproductive lawyers, egg brokers, women who they themselves struggled with infertility and used egg donors and/or surrogates to conceive. Understandably, these women have issues with the film.

But on this particular night, I noticed in the back of the auditorium, a young woman holding up a card board sign which read, Anonymous Us. I had only recently heard about this website and the project which was being run by this woman Alana S. Newman. At one point during the Q and A period of the night, Alana raised her hand and was called upon to ask her question. She challenged the audience to consider the children being created in this enterprise, the children intentionally created and largely separated from their biological mothers and fathers (in the case of sperm donation) and half-siblings. Her message resonated with many in the audience. I chatted briefly with Alana after the screening. She was off to play music at a gig she had that evening and she handed me her music CD which was packaged in a paper bag. That music I would later use in my next film, Anonymous Father’s Day, which highlights the stories of donor-conceived people – including Alana herself, one of the people interviewed in this film.

The next day, while reading my google alert news on the film, I was mortified to see Alana referred to as “Shark Tank Girl” by one of the women attending the screening. This woman maintains a blog on third-party reproduction and had attended my screenings at Fordham and Columbia screenings. She wrote:

I was civil and level, as neutral as I could be in my questioning until Shark tank girl-well ,I only took one little pot shot, couldn’t help it. I asked is there a model by which ART is practiced elsewhere that they think is done according to their standards and that they would consider acceptable and I got an answer that made no sense-it might have, but it was just blah blah blah, nothing substantive. Which was when Shark Tank girl chimed in on how in other countries there is a homestudy done just like they do for adoption, to see if it’s a home and family fit to be parents. My pot shot was-maybe they also do a better job of screening donors too (this girl supposedly passed through and donated twice herself). I reminded the Panel that I was asking about all ART and not just Donors and that in adoption there are different risks & liabilities for placing an existing child compared to who is entitled by law to have children through any form of reproduction.

Why on earth, I wondered, was this woman calling Alana “Shark Tank Girl”? I couldn’t imagine an older woman calling Alana by such a pejorative name. I mean, as an older woman myself, watching another older woman ignore this young person’s very real pain and concerns and calling her names? So I emailed Alana, who gave me the backstory. Alana had once been invited to speak at a workshop for people considering having children via reproductive technologies – she felt she had been thrown into a shark tank because her message was not well received and she is seen as an enemy of the infertility industry.

Since then, I’ve appeared on the Dr. Oz, addressing these issues, with Alana in the audience. And of course “they” were there too. Alana’s attacker wrote again here:

Shark Tank Girl stood up to say that she is 5 months PG, that she has been an Egg Donor and is a Donor Offspring herself, here at The Dr Oz Show to say that Anonymous Donor Conception is wrong because it strips the child of their rightful PARENTAL connection to, you guessed it, the Donor. A parent and a donor are not the same thing.

Recently, Alana has come under fire again for her latest piece calling out the “new sexual predators” as it relates to older women and gay men needing young fertile women in order for them to have a child. Of course her analogy went over like a lead balloon within the industry.

Here’s what I know about Alana. She is strong and powerful and gentle and loving. She has a heart for people struggling with infertility but wants to be sure we don’t harm others, exploit the poor, see or treat children as commodities in our desire to pro-create. She’s fearless in her willingness to go anywhere and talk to anyone – even if that means being thrown to the sharks.

The Attack of the Raging Secularists