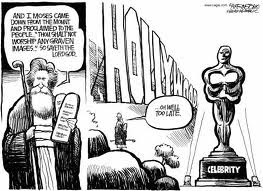 “Victim celebrities,” Ralph Nader calls them, by which he means, people who have been victimized by an abusive act or policy. They often make the best political activists against it because they bring the principle down to the personal level.

But there are also “celebrity victims,” movie stars and other assorted famous faces in the popular culture. These “stars” are often put in harness by industries and advocacy groups to use their fame to push a particular political agenda, because, fame matters in this culture, they are usually on the political “side” that the media likes, and politicians bow and scrape at their very presence.

Ditto, Michael J. Fox who pushed embryonic stem cells and human cloning research in political ads and biological baloney advocacy as the primary answer to Parkinson’s disease, when other modalities were offering great hope. That was then. Today, he hasn’t turned against ESCR, but he has seen the light to bring a more balanced advocacy to his work. From the ABC story:

Michael J. Fox, whose turn from Parkinson’s disease patient to scientific crusader made him one of the country’s most visible advocates for stem cell research, now believes the controversial therapy may not ultimately yield a cure for his disease, he told ABC’s Diane Sawyer in an exclusive interview. There have been “problems along the way,” Fox said of stem cell studies, for which he has long advocated. Instead, he said, new drug therapies are showing real promise and are “closer today” to providing a cure for Parkinson’s disease, a degenerative illness that over time causes the body to become rigid and the brain to shut down.

“Stem cells are an avenue of research that we’ve pursued and continue to pursue but it’s part of a broad portfolio of things that we look at. There have been some issues with stem cells, some problems along the way,” said Fox, who suffers from the diseases’ telltale tics and tremors. “It’s not so much that [stem cell research has] diminished in its prospects for breakthroughs as much as it’s the other avenues of research have grown and multiplied and become as much or more promising. So, an answer may come from stem cell research but it’s more than likely to come from another area,” he said.

The “broad portfolio” isn’t new. It existed at the time of his earlier stridency. Even now, there are no human ESC trials for Parkinson’s. And human cloning hasn’t yet been reliably accomplished. But this is a significant back off by Fox.

One is tempted to be cynical. Fox’s earlier misleading TV ads were used by Democrats to demagogue their political opponents as somehow wanting to thwart CURES! CURES! CURES!, with Fox as the more than willing accomplice. Stem cells have ceased to be a potent political weapon for the Democrats, and so suddenly Fox has a more balanced understanding. How convenient.