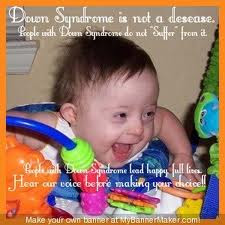 There is no place in a society based on human equality and the sanctity of life for lawsuits that ask juries to determine that a baby was wrongfully born. Such a case just came down in Portland (why am I not surprised), Oregon, where a jury awarded $2.9 million against doctors for failing to properly detect Down syndrome in prenatal tests, hence preventing the parents from aborting.

We discussed this story the other day, so I won’t repeat the details. But I thought it warranted greater exposition. Here is how I conclude “Wrongful Birth Lawsuits Are Wrongful” at the Daily Caller:

We have such a split mind about procreation. On one hand, we believe parents have a fundamental right to have a child by any means necessary, and at the same time, if they change their minds, they can destroy gestating babies that are not wanted. Indeed, would-be parents routinely spend tens of thousands of dollars creating embryos through IVF. But, if too many embryos implant, they have “selective reduction” in which triplets may be “reduced” (a euphemism for abortion) to twins (in reality, triplets with a dead sibling).

A tragic situation in Florida in 2006 illustrates where we are. When a woman became pregnant with two IVF embryos and one tested as positive for Down syndrome, she obtained an abortion. But the abortionist “reduced” the “wrong” fetus. The woman then had a second abortion. Two minus two equals zero. (The doctor subsequently lost his medical license.)

The time has come to reverse course. We could begin with states prohibiting wrongful birth lawsuits as a matter of public policy. We may have a right to have a baby, but we don’t — or at least shouldn’t — have a right to the baby we want. Most importantly, none of us should ever be declared by a jury to be a wrongful life. May Kalanit never learn that her parents would have prevented her from ever being born.

If a doctor causes a disability through negligence, damages are warranted. But when the doctor doesn’t cause the injury but a natural child is born, there should be no lawsuit permitted because we aren’t happy with the child we received.

Another Push for Child Euthanasia in LA Times