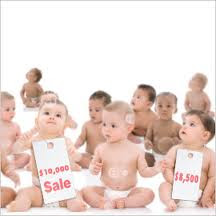 Baby selling is a form of human trafficking, and as such, it needs to be stopped whenever and wherever it is tried. Now, San Diego “reproductive law” attorney and biological colonialist Theresa Erickson, and her gang, have been busted for selling babies. Three guilty pleas. From the Los Angeles Times story:

According to court documents, Erickson hired women in San Diego to go to Ukraine to be implanted with embryos created from the sperm and eggs of donors. Once a woman was in the second trimester of pregnancy, she would return to San Diego and Erickson would “shop” the babies by falsely telling couples that a couple who had intended to adopt the baby had backed out of the deal. The new couple would then be charged between $100,000 and $150,000, according to prosecutors. “These were people who desperately wanted babies,” said Assistant U.S. Atty. Jason A. Forge.

Desperate people are always potential victims of human predators. Biological colonialism and human trafficking in one case. Good for the Feds for cracking down.