With the news and subsequent fall-out from Judge Royce Lamberth’s decision that the current administration’s policy, which allows federal funds to be used in embryonic stem cell research, violates the Dickey-Wicker Amendment, there has been much outrage that this research has come to a grinding halt. Let the rhetoric wars and hyperbole contests begin! Bold headlines, like, “Forget Stem Cell Cures for a Generation” and that Lamberth’s decision was, “disappointingly bad” have been tempered by those claiming private funding is the best way to advance and sustain research, since those who invest will reap any financial benefits from cures. It is interesting to note that a new poll just out, shows 57% of Americans oppose taxpayer funding of embryonic stem cell research. We here at CBC thought now would be a good time to reprint a piece written last year, explaining what the Dickey-Wicker Amendment is and what it does and how now, more than ever, this little known amendment may be our last stand. This is, and always has been, an ethical debate. Not a debate over who should pay for it. But calling out the question, should we even be doing it.

By Jennifer Lahl and Elaine PettyNever before have the ethical lines we draw in the sand been so important. Today we are on the edge of creating a new landscape of how we view and treat human beings, for we now have technology to create human life for experimentation. This scientific power is developing against a backdrop of a cultural imperative to do the “greatest good for the greatest number” and amidst a scientific community which often sees its role as the new priesthood managing this ethical decision-making. Now, more than ever, we must get this right.A current case in point is what will happen with the Dickey-Wicker Amendment. Sometimes referred to as the Dickey Amendment, it prohibits federal funds to be used in the creation of human embryos or for research on human embryos where the embryo would be harmed, destroyed or discarded. For years it has been, as Dr. William Hurlbut of the now defunct President’s Council on Bioethics asserts, our “bulwark against barbarism” in these great stem cell debates – up until now that is. Now Dickey-Wicker is at risk of expiring. Why? Some say it is outdated because it stands in the way of scientific progress. Representative Diana DeGette, a firm supporter of federally funded embryonic stem cell research says, “Dickey-Wicker is 13 years old now, and I think we need to review these policies.” Her reason for policy review? She feels it is “necessary to foster this research.” Sadly, precious few know about this amendment and even fewer are taking note.Dickey-Wicker first came into law in 1996, under the Clinton administration. This is important to point out, if only because the Bush administration took much heat for being “anti-science” and “banning” federal funding of embryo research. In fact, Bush was the first president to permit federal funds to be used in embryonic stem cell research. But it was under the Clinton administration, when embryonic stem cells were first discovered and “surplus” embryos became a reality (because of greater efficiencies in in-vitro fertilization technologies), that these ethical and moral concerns arose. And so Dickey-Wicker was proposed and enacted. The amendment must be renewed annually and has been every year since the 1997 fiscal year. That is, until now. With it set to expire at the end of the 2009 fiscal year, some are proposing that 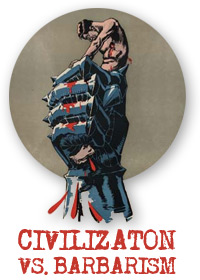 Dickey-Wicker not be renewed, as it is an out-of-fashion amendment. They say that it only serves as a reminder of the days when scientific progress was hindered by some who held a different view of the smallest and seemingly insignificant members of the human family. This different view includes that these tiny lives have dignity and should be protected, esteemed and revered as something wondrously made and not fodder for scientific research and inquiry.A newly released documentary entitled Lines that Divide: The Great Stem Cell Debate invites us to follow the thought experiment of what happens if the Dickey Amendment is allowed to runs its course. What will that mean? Well, it will mean for the first time in our American history, we will not only permit, but we will encourage the practice of creating of human life for the sole purpose of doing research that requires the destruction of that life. It will remove one barrier which has recognized that human life is not just raw resource material. Perhaps more significant, this amendment acknowledges that ethics in scientific research matters. Removing this barrier further encourages the “why stop here” mentality. Once you’ve accepted the premise that human life can be created and destroyed for the greater good, why not allow the embryos to grow a little longer in order to harvest their organs? Why not clone human embryos in order to better understand specific diseases? Why not use some for the benefit of others?One can quickly see just how dangerous this line of thinking is. These arguments must be made in the public square; they must be a part of the public conversations and debate. And reasonable people, if given the chance to hear the case, can and will be persuaded. Moral truths are available and accessible to all. Never before has the time been so critical to make the case.—–Jennifer Lahl is the founder and president of the Center for Bioethics and Culture Network. She is the associate producer of Lines that Divide: The Great Stem Cell Debate available at LinesThatDivide.com and has written, directed and produced, Eggsploitation, released in August 2010 and available at Eggsploitation.comElaine Petty, a member of the board of directors of the Center for Bioethics and Culture Network, is an international consultant who recently completed a graduate degree at Georgetown University, which published her article, “Moral Implications of Embryonic Stem Cell Research: Is Public Policy a Matter of Balancing Competing Interests or of Overriding Concerns?”

The Sanctity of Life in a Brave New World

Who is my Daddy?

Surrogacy and Same-Sex Marriage: A Tale of Two Countries