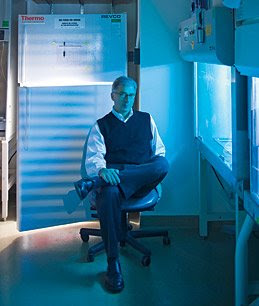 Time Magazine’s cover article this week is on Stem Cell Research: The Quest Resumes. You can read it here.

It’s basically another “blame it on Bush” piece on the tails of Obama’s “restore science to its rightful place” speech. Sorry, but I hate to mince words.

Why would I say such a thing you ask?

First, the article starts out with Doug Melton’s story of his young son being diagnosed with Type 1 Diabetes and how that spurred on his quest in the field of stem cells. This debate has always tried to pit those who want cures against those who don’t want cures. Dr. Melton, we all have sick family members and we all want cures. The debate is over the ethical use of human embryos for research. And I wonder if Dr. Melton is following the research of Dr. Michael Haller at the University of Florida? Dr. Haller’s research is focused on using umbilical cord blood stem cells in patients with Type 1 Diabetes.

Second, the Timeline in the article says this:

“Then, in 2001, everything changed. The use of discarded embryos made embryonic-stem-cell research deeply controversial in the U.S. Citing moral concerns, then President Bush restricted federal funding for the study of human embryonic stem cells. Under the new policy, U.S. government funds could be used only to study the dozens of embryonic cell lines already in existence — many of which proved not to be viable. “

Truth be told, the timeline should begin under the Clinton administration, where these conversations began (remember is was 1998 when embryonic stem cells were first isolated). Clinton’s National Bioethics Advisory Council had discussions over using federal funds on embryo research. And Clinton did not fund escr. Not until 2001, did Bush permit SOME federal funding to be used on escr. Some $160 million federal dollars under Bush went directly to embryonic stem cell research here in the U.S. But sadly, in 2001, we are told “everything changed”.

Ironically, much of the article goes on to celebrate the wonderful 2006 breakthrough in iPSC research, which has NEVER been a point of ethical debate.

So, why does science need to be restored to its rightful place? And what exactly would that rightful place be? Seems to me that under the Bush administration, where the policies put in place were guided by a moral framework, we saw good science advance and good developments and breakthroughs achieved.

If the debate is over cures, it is in the interest of all parties, that ethics is front and center of any policy or funding decisions. Without ethics, science is doomed. Within a good ethical framework is the rightful place for science to operate and ultimately flourish.

Should Doctors Tell Patients When Death is Imminent? It Depends on the Patient

The Truths Behind the News

Imagine the Pain of Knowing of One’s Own Dehydration!