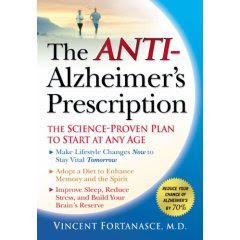 Dr. Vincent Fortanasce, who is a supporter of my work has written a new book and I wanted to give a plug for it. It’s available on Amazon.com. Here’s what his staff sent me on his book:

In a 4 step method Dr. Fortanasce will present the DEAR method that is medically proven to prevent Alzheimer’s through (1) Diet, (2) Exercise, (3) Accentuating the Brain’s Reserve, and (4) the Rosary & meditation.
1. If you live long enough, 75% will develop Alzheimer’s Disease.
2. 70% of those diagnosed with Alzheimer’s end up in nursing homes within three years
3. Alzheimer’s can be prevented – scientifically proven
4. Prayer & community is as essential as diet & exercise

You can read about this and more in Dr. Vincent Fortanasce’s new book The Anti-Alzheimer’s Prescription.

In Memory of Lost Moms